FOX headline on ventilators worse than "misleading" while Americans are dying

There is a saying in the news business, "If it bleeds...it leads." That is because bad headlines get the most attention.


News programming uses a hierarchy of if it bleeds, it leads. Fear-based news programming has two aims. The first is to grab the viewer's attention. In the news media, this is called the teaser. The second aim is to persuade the viewer that the solution for reducing the identified fear will be in the news story. If a teaser asks, "What's in your tap water that YOU need to know about?" a viewer will likely tune in to get the up-to-date information to ensure safety.

Headline on FOX "New York City stockpiled ventilators for a pandemic, only to later auction them off: report"

And what they reported afterward the headline


Those ventilators were then auctioned off some time before 2016 because the city could not afford to maintain them in working order, partially because the model of ventilator the city had purchased was no longer in production after 2009, the report said.

Naturally some friends on Facebook are sharing the headline without reading...or mentioning the rest of the article. 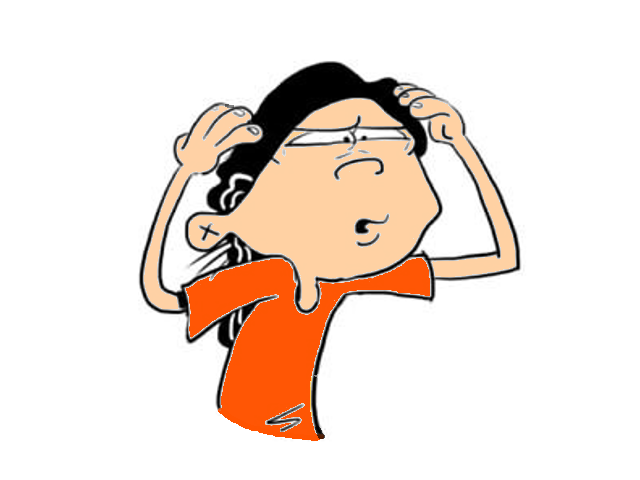 Posted by Kathie Costos at 4:15 PM No comments: Links to this post

The Florida Veterans Reunion is one of the largest and longest running veterans reunions in the country.


Since the Veterans Reunion in Melbourne Florida has been canceled, for the right reasons, I am putting up videos from past years.

All of the people showing up to escort the Wall are disappointed this year you will not be able to do it, so here is my tribute to you!

Posted by Kathie Costos at 10:03 AM No comments: Links to this post

Afghanistan veteran who died surrounded by his own medals was 'failed by the system' when his PTSD wasn't recognised, coroner rules


War veteran Jesse Bird took his own life after system failed him, a coroner ruled
Found dead in his home in 2017 after department rejected pleas for help
Coroner ruled there was 'a lack of care, attention and proactive support for him
Department of Veterans' Affairs will consider and respond to Coroner's findings 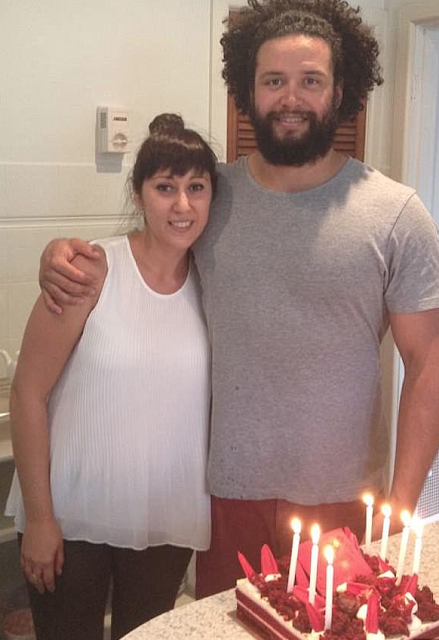 Mr Bird's ex-girlfriend Connie Boglis (pictured with Jesse) has previously slammed the Department of Veterans' Affairs over the lack of support to him. He took his own life after the system failed him, a Coroner has ruled

'There appeared to be a lack of care, attention and proactive support, leaving Jesse with the belief that the only choice he had was to give up,' the Coroner said.


A young war veteran who suffered post-traumatic stress disorder when he returned from serving in Afghanistan took his own life after the system failed him, a coroner has ruled.

Former Australian Army private Jesse Bird, 32, was found dead in his Melbourne home in June 2017 after the Department of Veterans' Affairs knocked back multiple pleas for assistance.

He had $5.20 in his bank account at the time of his death, which came weeks after he was informed by the department his permanent impairment claim had been rejected.
read it here
Posted by Kathie Costos at 8:50 AM No comments: Links to this post

It Is Your Choice To Be Contagious Or Value Isolation Directives

Stop being responsible for spreading death

The only way COVID-19 is spread, is one person to another. The only way to stop it, is choosing to stop spreading it! 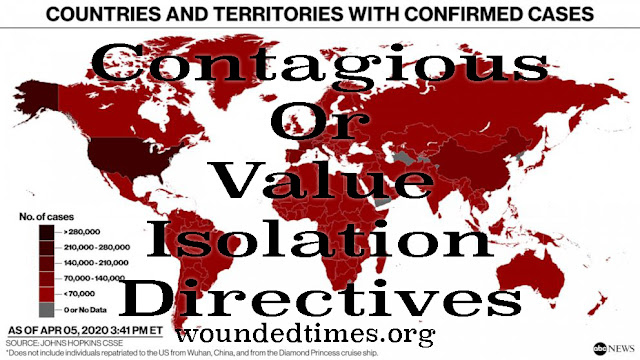 Coronavirus map: Tracking the spread in the US and around the world

We have seen too many irresponsible people putting their own desires to enjoy their lives come before the lives of all others.

We saw it with spring breakers flocking to beaches in Florida.


Thousands of spring breakers traveled from one Florida beach to cities across the US. Mapping their phone data shows the importance of social distancing amid the coronavirus outbreak. 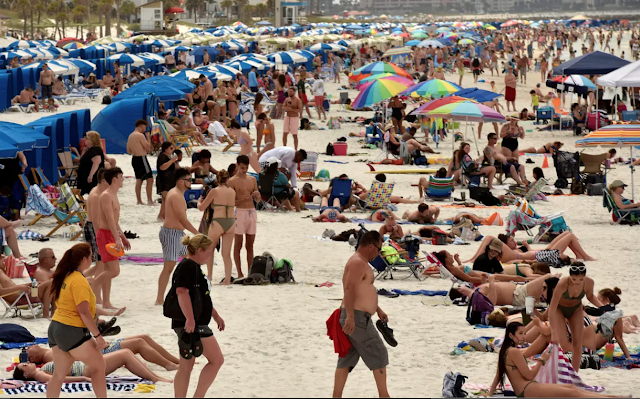 Despite guidance from the Centers for Disease Control and Prevention recommending social distancing to stop the spread of coronavirus, spring-break partiers flocked to Florida beaches earlier this month.

Newly released phone location data shows how people congregated at one Florida beach before traveling across much of the US.

The data shows about 5,000 devices traveling from a single beach in Fort Lauderdale in one week to cities spanning the eastern US, including New York, Chicago, New Orleans, and Houston.
read it here


We saw it during Bike Week 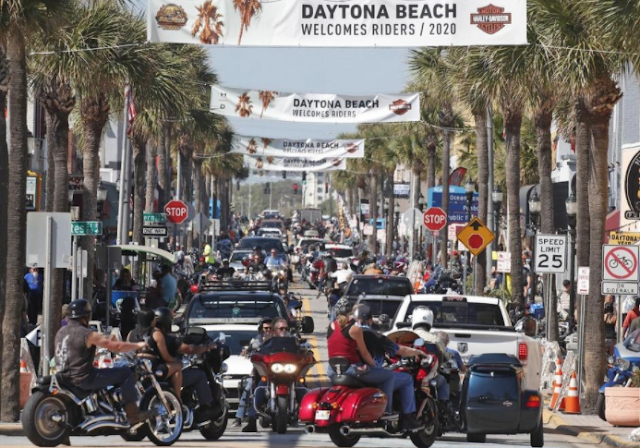 Despite the city of Daytona Beach trying to curtail Bike Week by revoking permits because of coronavirus concerns, thousands of bikers thundered onto Main Street on Saturday.

And according to Volusia County Sheriff Mike Chitwood, an additional 20 people are being monitored for coronavirus in the county: one in Daytona Beach, four in Ormond Beach, three in Port Orange, two in New Smyrna Beach, three in Deltona, five in DeLand and two in DeBary.

Friday night, Daytona Beach Mayor Derrick Henry announced the city had revoked permits for any gathering of 100 people or more. That decision went into effect at 8 a.m. Saturday.
read it here


This map shows the spread in Florida 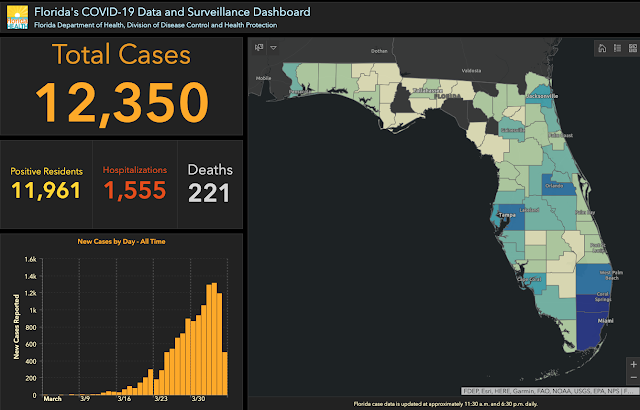 The Florida Department of Health has launched a new update to their interactive COVID-19 map, which now allows users to see confirmed cases by zip code.

The interactive map allows users to see what is going on where they live, or work. Hotspots in the map are highlighted in red.

Expanded testing for the virus at sites set up by Florida’s National Guard in South Florida, and across the state, has resulted in valuable data for the Department of Health.
read it here

The choice is ours. The people paying for what we choose to do right here...right now, belong to us.
Posted by Kathie Costos at 9:32 AM No comments: Links to this post

The hospital’s new director, James Doelling, sent an email to Hines VA staffers calling for “all hands on deck” after many employees had already been working from home for weeks. 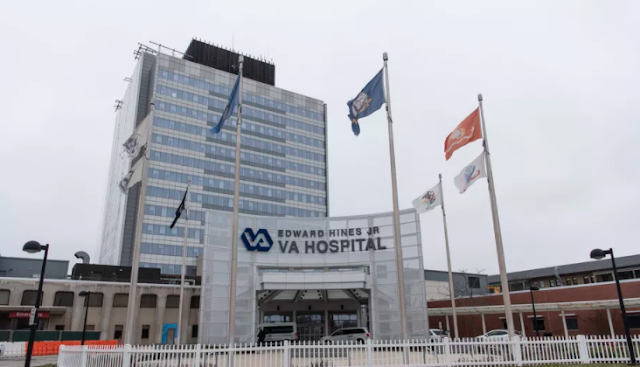 Employees at the Chicago-area Edward Hines Jr. VA Hospital are concerned about a new “all hands on deck” directive that would send employees who have already been working from home amid the coronavirus outbreak back into the field.

The workers include social workers, dietitians, psychiatrists and more at the hospital whose services began shifting to telehealth practices when Gov. J.B. Pritzker’s stay-at-home order to mitigate the spread of COVID-19 began mid-March.

Some — like a social worker and mother of a 3-year-old — started working from home weeks ago while others began teleworking as recently as last week.

But that seemingly came to an abrupt end last week when the hospital’s new director, James Doelling, sent an email to Hines VA staffers calling for “all hands on deck” as the center prepared for a surge of veterans in need of services.
read it here
Posted by Kathie Costos at 8:19 AM No comments: Links to this post

His Love redeemed all of us!

Honoring those who risk their lives on Palm Sunday

For many Christians, today is Palm Sunday. (Sorry fellow Greeks but ours is next week.) 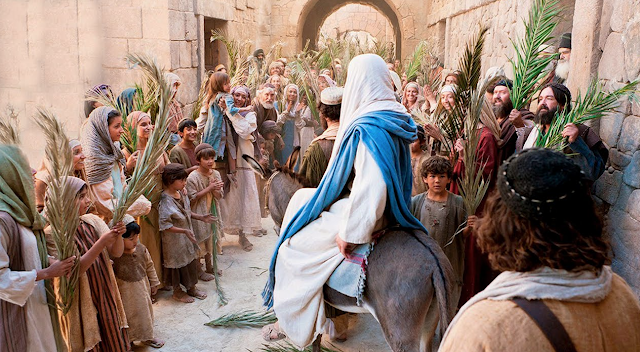 I spent most of the day thinking about Jesus and wondering what was going on in His mind when He was greeted by the crowd and palms laid down on His path. He knew His time on this earth was almost over and this day would be the turning point.


Matthew 21 New International Version (NIV)
Jesus Comes to Jerusalem as King
8 A very large crowd spread their cloaks on the road, while others cut branches from the trees and spread them on the road.

9 The crowds that went ahead of him and those that followed shouted,

“Hosanna to the Son of David!”

“Blessed is he who comes in the name of the Lord!”

“Hosanna in the highest heaven!”

10 When Jesus entered Jerusalem, the whole city was stirred and asked, “Who is this?”

11 The crowds answered, “This is Jesus, the prophet from Nazareth in Galilee.”

Jesus at the Temple
12 Jesus entered the temple courts and drove out all who were buying and selling there. He overturned the tables of the money changers and the benches of those selling doves.

14 The blind and the lame came to him at the temple, and he healed them.

15 But when the chief priests and the teachers of the law saw the wonderful things he did and the children shouting in the temple courts, “Hosanna to the Son of David,” they were indignant.

16 “Do you hear what these children are saying?” they asked him. “Yes,” replied Jesus, “have you never read,“‘From the lips of children and infants you, Lord, have called forth your praise’?”


Yet knowing what was going to happen to Him, He still reacted with love and compassion. He still did what He could to heal those who needed Him. Nothing about Him changed.

His Love redeemed all of us!

Today we see so much suffering all over the world. No country has been spared from the pandemic. We see greedy people try to make whatever money they can, much like the money changers confronted by Jesus.  We see hoards of people taking whatever they can, leaving many to leave with nothing they need. We see crowds of people who want to see an event, even though they can become infected with the virus, spread it out into their own homes and communities.

There is a greater infection among us, and that is when people decide what they want to do is all that should matter to the world. They are special in their own eyes. Everyone else suffering for what they do is someone else's problem. Yet these same people will be the first ones screaming for other people to take care of them.

Today we also see more people acting like Jesus, risking their own lives to save strangers. We see them show compassion and courage. We see people act out of pure love doing whatever they can to make someone else's life better.

Too many times we hear people say that there are no more miracles. We see them all around us everyday when some decide to do what they want for themselves, and others, with the same ability to be selfish, turn around and do selfless acts, no matter what price they may pay...even if it costs them their own life.
Posted by Kathie Costos at 6:44 PM No comments: Links to this post