PTSD? Why be afraid if you're not alone? 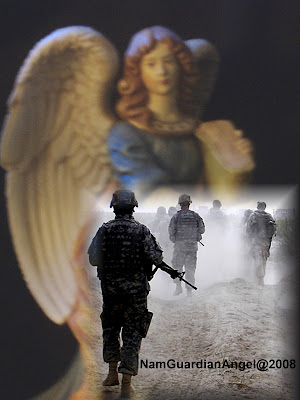 
Nearly five years after he was wounded, it has taken Phillips a long time to adjust to civilian life. He says he was diagnosed with post-traumatic stress disorder (PTSD) which affects many combat veterans.


Phillips is determined to manage his PTSD and not let it control his life. He says, "I pretty much deal with it by telling my parents about it...both sheriff's officers (in California). Both of them have been in different firefights." Phillips also finds his wife and three small children help relieve the tension. He also is taking a proactive role in helping vets, like himself, get the VA benefits they deserve. He organized a recent information meeting to help vets learn about benefits and get VA appointments. Some Valley veterans with PTSD attend regular meetings that were started by case manager Patricia Tuli at the Carl T. Hayden Veterans Affairs Medical Center in Phoenix. Tuli works with many veterans of Iraq and Afghanistan.


go here for the rest

From the University of Virginia

Nearly 7.7 million Americans have PTSD at any given time.

About 30 percent of men and women who have spent time in war zones experience PTSD.

PTSD was first brought to public attention by war veterans and was once referred to as "shell shock" or "battle fatigue." The likelihood of developing PTSD depends on the severity and duration of the event, as well as the person's nearness to it.

serious accidents (such as car or train wrecks)
natural disasters (such as floods or earthquakes)
man-made tragedies (such as bombings, a plane crash)
violent personal attacks (such as a mugging, rape, torture, being held captive, or kidnapping)
military combat
abuse in childhood

If PTSD wound becomes part of you, why would you be afraid to talk about it? You're not alone suffering from it. Your family is not alone coping with it. All you have to do is look over the last few years of news reports to know how large the world's population has been wounded by trauma.

Thirty years ago, it was America's secret. It was trapped in whispers and silence. Hidden under shame with the thought this wound was a character defect of those who suffered from it. They would look at others who lived through the exact same event appearing to be untouched. The thought of being weaker than others caused them to suffer in secret. It was not a well kept secret because others could see the changes in them.

I found myself making excuse as well. Even though I knew what PTSD was from the beginning, it was hard to protect my husband from judgmental attitudes that PTSD meant Jack was crazy. Working in offices, and most of the time surrounded by men, it was hard to hear them talk about normal life. They would talk about taking their wives to movies. I would tell them I wasn't interested in going to movies, when the truth was, I loved to go to them. I couldn't tell them my husband couldn't tolerate them anymore. He couldn't handle being in a crowd, in the dark and feeling vulnerable especially if he had a flashback, feeling as if the enemy was right behind his seat.

They would complain their wife stole the covers at night or how she would stick her cold feet on their warm leg. I couldn't do anything more than laugh while I wanted to cry. My husband and I never spent an entire night in the same bed during our 23 years of marriage. I doubt we ever will.

The church I attended back home in Massachusetts, the same one I attended since birth, where everyone knew me, hardly knew what my husband looked like. Some wondered if we were still married.

I would go shopping by myself because he couldn't stand the malls and hated to be in crowds.

The list goes on of how what we found to be normal for us, was abnormal to the rest of the world. Years later it was easier to talk about it because I had come into contact with so many others going through the same things. Once someone spoke of it, or I indicated something about it, then the communication opened up. It was never racking every time I did because I wondered what they were thinking about me and especially about Jack.

To this day, knowing what I know, knowing the stories of others, knowing that we are not alone with this, I still feel the need to protect him. I don't even use my married name when I write. Often I wonder why I would still feel this need of protecting him considering to me there is no reason the stigma lives on and that there is no shame in being human, no shame in being wounded by tragedy and trauma and there is nothing about him to be ashamed of. To me, he is an amazing man, filled with kindness and gentleness as well as strength. His character lives on beneath the dark days of flashbacks and drained days following nightmares. Still in my mind I know the attitude of too many in this country and around the world. It is one of the reasons I work so hard to provide information and stories of others going through all of this. Sooner or later there will be no more stigma to overcome.

There are some people who can speak openly about the ravages of PTSD on their lives. I admire them greatly. It's very hard to have all of this going on in your life and be able to talk about it. It takes a lot of courage to be able to look at your life and see the need to open up about it. Jack can't. I walk a very thin line on what I feel free to speak out about and what remains in the shadow of the work I do.

When I did the video Coming Out Of The Dark, the song by Gloria Estefan was perfect.

COMING OUT OF THE DARK (Gloria Estefan)

Why be afraid if I'm not alone?
Though life is never easy, the rest is unknown
Up to now, for me, it's been hands against stone
Spent each and ev'ry moment
Searching for what to believe

Starting again is part of the plan
And I'll be so much stronger holding your hand
Step by step, I'll make it through; I know I can
It may not make it easier
But I have felt you near all the way


Why is it that we still feel the need to be ashamed and afraid? What is there to be afraid of? The thoughts of others who would not have those ignorant thoughts if we all spoke out about it? The more people talk about being human, surviving a traumatic event, overcoming it and still stand, the weaker the stigma will become. It takes a greatness of character to survive the carnage of combat, the violence of police work, the tragedy of a firefighter and emergency responder, the terror of crime and the wrath of nature. Yet we look at the survivors as damaged instead of wounded.

When we look at the veterans who have committed suicide, we fail to see how they not only carried on when their lives were in danger, as well as their military brothers and sisters, they acted with bravery and courage. It was not until they were no longer in danger from the human enemy, but when they were back home with the enemy in their mind that they felt they could no longer go on. When they commit suicide while deployed, they don't do it while the fight is going on, but in the quiet of their barracks or the silence of the night.


February 24, 2008 - During Michael Sherriff's nine-month tour in the battlefields of Iraq, his mother worried that one day a pair of Army officers in full dress would come to her door with terrible news.

"You're just on edge every single minute," Jennifer Cass said.

She didn't dream her son would become a victim of the war the way he did -- not on a faraway battlefield like she feared, but like a growing number of veterans -- by his own hand once he made it home.

Of 807,694 veterans diagnosed with depression and treated at a Department of Veterans Affairs facility nationwide between 1999 and 2004, 1,683 committed suicide, according to a study released in October 2007 by the University of Michigan Depression Center.

After her son safely returned stateside in April 2004, Cass dealt with a new set of worries. She said she began experiencing stress and anxiety as her Mikey had an increasingly difficult time adjusting to civilian life.


Information, sharing and caring will erode the stigma and replace it with hope. Hope that they will be able to speak of what is happening inside of them and be embraced instead of embarrassed. Hope that once they say they need help, the help they need to heal will be there waiting for them. Hope that as soon as they know the trauma was too strong for them, they will be supported by those who care about them. Hope that life can regain a quality of what it once was. Hope that compassion will rap arms around them instead of point fingers at them.

So why be afraid if you're not alone? 7.7 million Americans are in the same company of wounded. We are not the only nation with PTSD. Every nation has a population of people wounded by it as long as they have humans in it.


"The willingness with which our young people are likely to serve in any war, no matter how justified, shall be directly proportional to how they perceive veterans of early wars were treated and appreciated by our nation." - George Washington 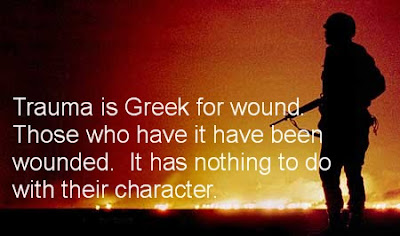 Posted by Kathie Costos at 9:18 AM