I received an email from someone I respect and it took me by surprise because I couldn't understand how people working with PTSD were not aware of what was known 30 years ago. There were people all over the country already working on PTSD when I got into it as a amateur volunteer 25 years ago.


PTSD was not a legally diagnosed mental disorder until 1980 or 1981 so I
would be careful with this statistic.


This is a fact. The DAV commissioned a study Readjustment Problems Among Vietnam Veterans, The Etiology of Combat Related Post Traumatic Stress Disorder by Jim Goodwin, Psy.D


"In its efforts to help these veterans, the million member Disabled American Veterans (DAV) funded the Forgotten Warrior Project research on Vietnam Veterans by John P. Wilson, Ph.D. at Cleveland State University. That research resulted in formation of the DAV Vietnam Veterans Outreach Program to provide counseling to these veterans in 1978. With 70 outreach offices across the United States, this DAV program served as a model for the Veterans Administration (VA) Operation Outreach program for Vietnam era veterans, which was established approximately a year later."

They knew what it was and they were already addressing it. This is the most troubling part of all of this. They have known for 30 years yet all the work and research has been forgotten by those doing it now. All they are doing is rehashing what has already been done and proven to work. I have the pamphlet that is all yellowed with age and falling apart because I have referred back to it too many times. 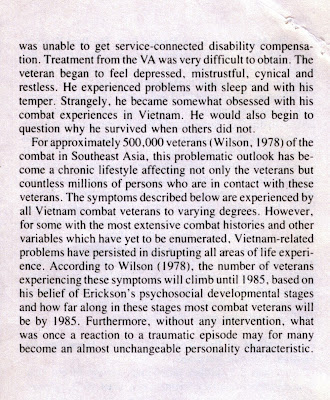 This is one of the biggest reasons why I have an anger issue with all of this. None of this is new. None of this was not known. None of this should have been any kind of a surprise to anyone. I've come to the conclusion that 30 years of work has gone down the drain because no one was using any of the research that was done back then. They just redid it all and wasted time. Instead of gearing up to be able to have everything in place for the warriors of today and addressing yesterday's veterans problems, they just sat back and let it happen.

I posted this because if the person who sent the email doubted what was known back then, then I am sure many of my readers are thinking the same thing. It is all true.