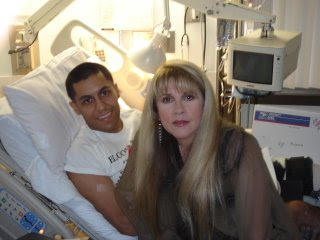 In recent days, Nicks has devoted herself to causes such as support for wounded soldiers at Walter Reed Army Hospital in Washington, aiming to use music in the rehabilitation of soldiers wounded in Iraq and Afghanistan. She gives hundreds of iPods away on her frequent visits.

Legends don’t have to.

The rock and roll gypsy has twirled her way through a career of dreams, mesmerizing her faithful fans for more than 30 years now.

With flowing chiffon and lace and a leathery voice, Nicks has pretty much kept her style throughout her time with supergroup Fleetwood Mac and a successful solo career that is being highlighted on her current tour.

Nicks spins her way here for an appearance at the Toledo Zoo Concert Series at 7:30 p.m. Wednesday, in a show that will focus on solo material, with a few of her Mac classics tossed in. At 60, she seems to always be on tour — alone, with Fleetwood Mac, or even, as she did a few years back, with Eagles member Don Henley.

She rose to fame in the 1970s when she and then-boyfriend Lindsey Buckingham, whom she met in high school in California, joined the British-based band Fleetwood Mac.

http://nickslive.blogspot.com/2008/06/stevie-nicks-never-seems-to-change.html
Posted by Kathie Costos at 11:15 AM