Gen. Carter Ham, to call him a hero would be putting it mildly. He's a hero to the troops not just because he's a high ranking officer, but because he is willing to speak out on having PTSD. That is a kind of courage very few in his position are willing to do.

When men like my husband came home from Vietnam, they knew something had changed inside of them but they didn't know what it was. They suffered in silence just as generations before them suffered. When PTSD was first used in 1976 with a study commissioned by the DAV, news was slowly reaching the veterans. While they fought to have it recognized as wound caused by their service, it was very difficult to talk about. The perception that there was something wrong with them kept too many from even seeking help to heal.

After 26 years of doing outreach work and 24 years of marriage, my husband finally reached the point when he was ready for me to actually use my married legal name. Up until now it was almost as if he was ashamed to be wounded. Imagine that! What gave him the comfort was not anything I did. It came from seeing reports on the news and people he knows coming out, talking about it without any shame whatsoever. Hearing the courageous words from others is what brought him peace with PTSD. Because of great care from the VA, after a long battle with them, he's living a life instead of just existing in one slowly dying inside.

General Ham does not realize what he's just done by being willing to talk about this wound and normalize it. He's normal but combat and all other trauma related events are not part of normal life. It's all a normal reaction to abnormal events. Simple as that.

While there are still some commanders in the military today dismissing PTSD, calling it anything other than what it is, still exist and injure their troops, General Ham has shown what true care and leadership is. Plan on seeing a lot more veterans coming forward seeking help because of General Ham.

Senior Chaplain Kathie "Costos" DiCesare
International Fellowship of Chaplains
Namguardianangel@aol.com
www.Namguardianangel.com coming soon!
www.Woundedtimes.blogspot.com
www.youtube.com/NamGuardianAngel
"The willingness with which our young people are likely to serve in any war, no matter how justified, shall be directly proportional to how they perceive veterans of early wars were treated and appreciated by our nation." - George Washington 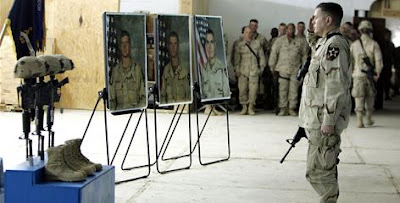 Gen. Carter Ham was among the best of the best — tough, smart and strong — an elite soldier in a battle-hardened Army. At the Pentagon, his star was rising.

In Iraq, he was in command in the north during the early part of the war, when the insurgency became more aggressive. Shortly before he was to return home, on Dec. 21, 2004, a suicide bomber blew himself up in a mess hall at a U.S. military base near Mosul and killed 22 people, including 14 U.S. troops. Ham arrived at the scene 20 minutes later to find the devastation.

When Ham returned from Mosul to Fort Lewis, Wash., in February 2005, something in the affable officer was missing. Loud noises startled him. Sleep didn't come easily.

"When he came back, all of him didn't come back. … Pieces of him the way he used to be were perhaps left back there," says his wife, Christi. "I didn't get the whole guy I'd sent away."

Today, Ham, 56, is one of only 12 four-star generals in the Army. He commands all U.S. soldiers in Europe. The stress of his combat service could have derailed his career, but Ham says he realized that he needed help transitioning from life on the battlefields of Iraq to the halls of power at the Pentagon. So he sought screening for post-traumatic stress and got counseling from a chaplain. That helped him "get realigned," he says.

The willingness of Ham, one of the military's top officers, to speak candidly with USA TODAY for the first time about post-traumatic stress represents a tectonic shift for a military system in which seeking such help has long been seen as a sign of weakness.

It's also a recognition of the seriousness of combat stress, which can often worsen to become post-traumatic stress disorder.
click link for more

Posted by Kathie Costos at 9:54 AM