PTSD:Maj. General David Blackledge shows what courage is back home 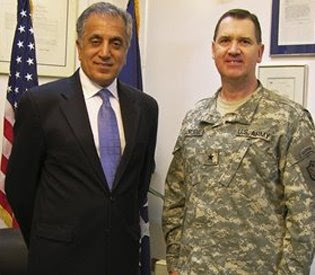 Photo by AP
In this photograph provided by Maj. Gen. David Blackledge, Blackledge, right, stands next to then U.S. Ambassador to Iraq Zalmay Khalilzad in Iraq in this undated photograph. From Boston Herald

November 8, 2008, Washington, DC (AP) — It takes a brave soldier to do what Army Maj. Gen. David Blackledge did in Iraq.

It takes as much bravery to do what he did when he got home.

Blackledge got psychiatric counseling to deal with wartime trauma, and now he is defying the military's culture of silence on the subject of mental health problems and treatment.

"It's part of our profession ... nobody wants to admit that they've got a weakness in this area," Blackledge said of mental health problems among troops returning from America's two wars.

"I have dealt with it. I'm dealing with it now," said Blackledge, who came home with post-traumatic stress. "We need to be able to talk about it."

As the nation marks another Veterans Day, thousands of troops are returning from Iraq and Afghanistan with anxiety, depression and other emotional problems.

Up to 20 percent of the more than 1.7 million who've served in the wars are estimated to have symptoms. In a sign of how tough it may be to change attitudes, roughly half of those who need help aren't seeking it, studies have found.
go here for more
http://www.veteransforcommonsense.org/ArticleID/11596
Posted by Kathie Costos at 10:10 AM