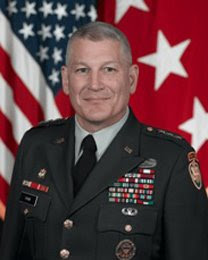 I am thankful for all of the men and women serving this country and those who served coming forward to talk about PTSD. All these years later after the first studies were done, there are now so many that soon no one will ever wonder again what PTSD is. There are literally hundreds of their stories on this blog but the most magnificent thing about all of them is that they were willing to talk about it no matter how much others wanted to stigmatize them. Their courage is a testament of the human spirit.

When commanding officers are willing to say they have PTSD because of their service, it sets and example for all others to follow. Because of General Ham, his willingness to face this wound without any kind of shame will allow all others to come forward to seek the help they need to heal.

Thankful story two belongs to General Carter Ham. As you read his story think of all the others coming forward and know we all owe them a debt of gratitude.

PTSD:General's story highlights combat stress
Gen. Carter Ham, to call him a hero would be putting it mildly. He's a hero to the troops not just because he's a high ranking officer, but because he is willing to speak out on having PTSD. That is a kind of courage very few in his position are willing to do.When men like my husband came home from Vietnam, they knew something had changed inside of them but they didn't know what it was. They suffered in silence just as generations before them suffered. When PTSD was first used in 1976 with a study commissioned by the DAV, news was slowly reaching the veterans. While they fought to have it recognized as wound caused by their service, it was very difficult to talk about. The perception that there was something wrong with them kept too many from even seeking help to heal.

Posted by Kathie Costos at 5:25 PM