Will we ever learn the price of war does not end when they make it back home? Looks like the UK hasn't either. 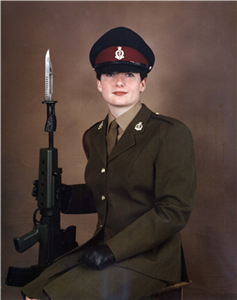 A distraught family was today mourning the death of their war hero daughter.

Today, the father of Chanice Ward, 29, told how her daughter had suffered from post traumatic stress disorder (PTSD) from her time in the army and he believes this may have led her to take her own life.

Ms Ward, of Barford, near Hethersett, was discharged from the army against her wishes and was pursuing a case for compensation with the Service Personnel and Veterans Agency when she died.

Earlier this year, she spoke to the Evening News about the horrific experiences she witnessed in Bosnia and Kosovo that left her suffering from PTSD.

Her father Ivor Ward, 57, who served 22 years in the army himself, plans to drape a Union Jack over her coffin at the funeral tomorrow . He said her case for compensation was still ongoing and that the family still could get the compensation.

Her death comes at a time when the issue of PTSD and the army's treatment of the condition has come under close scrutiny.

Last month an unprecedented 'suicide watch' was launched by commanders at Britain's main military base in Iraq following the deaths of three soldiers during a ten-week.
go here for more
29-year-old war hero dies

Posted by Kathie Costos at 2:55 PM