What kind of a twisted outcome is this leading to? First, a family calling themselves Westboro Baptist Church decides to protest at funerals. Legally they believe they have a right to do this no matter what anyone else thinks and now the Supreme Court has backed them up on it. They didn't seem to explain how free speech should be allowed to force people to listen. That is exactly what Westboro has been doing to the families. They are a captive audience. Families have to be there but Westboro does not. They target and stalk the families but that's ok with the Supreme Court.

Top that off with the startling fact Westboro targets families when they decide which funeral to protest at. Consider this. According to Icasualties.org, there have been 4,439 US deaths in Iraq and 1,496 in Afghanistan. Westboro claims they are protesting the fact that the military has gays serving in it. The whole military. Yet they do not protest every funeral. In other words, they target certain ones. Since they are claiming to be protesting gays and holding signs up thanking God for the deaths of the soldiers, they are also making public statements against the fallen suggesting they were gay. After all, if they are supposed to be all about being against gays in the military and all homosexuals, show up and protest at certain funerals, then they are targeting these fallen along with their families.


terrorism
n
1. (Government, Politics & Diplomacy) systematic use of violence and intimidation to achieve some goal
2. the act of terrorizing
3. the state of being terrorized
Collins English Dictionary – Complete and Unabridged © HarperCollins Publishers 1991, 1994, 1998, 2000, 2003

Westboro member and lead lawyer Margie Phelps said it was nobody's business whether the church used the money to finance more funeral protests.

"He intended to shut us down and he announced that far and wide," she said. "And the Pentagon backed him up on it. That was their plan. And now they're going to finance some of it, that's how they see it. It's a beautiful, poetic thing."

But this was fine with the Supreme Court? How can any of this be justice for anyone other than this group of haters to stalk, target and terrorize? 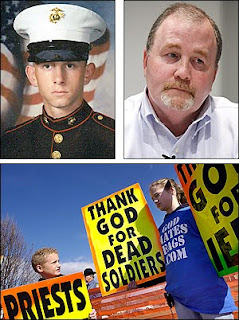 WASHINGTON - The father of a Marine killed in Iraq won't pay the nearly $100,000 in court costs charged by Westboro Baptist Church, which picketed his son's 2006 funeral, in the wake of his unsuccessful lawsuit against the group, his lawyer said.

"We're not just going to write them a check," Sean Summers, lawyer for Albert Snyder, said Friday. "We're going to make them work for it."

Snyder's son, Marine Lance Cpl. Matthew Snyder, was not gay, but the church pickets military funerals nationwide because they say soldiers' deaths are God's vengeance for the country's tolerance of homosexuality.

A lower court awarded Albert Snyder $5 million in damages for emotional distress. However, at the Supreme Court, all the justices except Samuel Alito sided with Westboro, which means Snyder may be on the hook for the church's court costs.

Westboro member and lead lawyer Margie Phelps said it was nobody's business whether the church used the money to finance more funeral protests.

"He intended to shut us down and he announced that far and wide," she said. "And the Pentagon backed him up on it. That was their plan. And now they're going to finance some of it, that's how they see it. It's a beautiful, poetic thing."

The Fourth Circuit has already ordered Snyder to pay Westboro $16,510.80. Fox News commentator Bill O'Reilly has offered to pick up that cost. Phelps said she would be willing to "barter" with O'Reilly for airtime on his show, "The O'Reilly Factor," instead.

Posted by Kathie Costos at 8:12 AM