Is the Feres Doctrine fair?
The legal precedent that protects the U.S. military from medical malpractice suits is challenged

By TRAVIS J. TRITTEN
Stars and Stripes
Published: June 19, 2011
Staff Sgt. Dean Witt would likely still be alive and raising his two children if an Air Force hospital had not botched a routine appendectomy.

Medical staff at Travis Air Force Base in California committed mistake after mistake following Witt’s 2003 surgery — including pushing a breathing tube into his stomach and using resuscitation equipment designed for children — that left the blond-haired, blue-eyed airman in a persistent vegetative state until he was finally removed from life support three months later by his family.

“We saw Dean and he was wired to so many machines,” Carlos Lopez, Witt’s brother-in-law, said. “I couldn’t believe what I was looking at. How do you go from a super healthy 25-year-old man to somebody who is essentially lifeless?”

Now, Witt’s death is the latest tragic case of military medical malpractice that has worked its way to the doorstep of the Supreme Court in an attempt to upend the legal precedent known as the Feres Doctrine. For more than 60 years, the ruling has protected the U.S. government from being held liable when servicemembers are killed due to official negligence while on duty.

The court is set to decide this month whether it will hear arguments from the Witt family and the government on whether to strike down protections against such suits and award damage payments for Witt’s death.

A Feres Primer
1950
The Supreme Court rules that the government is not liable for injuries to servicemembers on active duty caused by the negligence of other servicemembers. The decision creates what is now known as the Feres Doctrine and effectively blocks lawsuits over military medical malpractice on servicemembers.
1987
The Supreme Court upholds its 1950 Feres ruling in Johnson v. United States, saying the government is not liable for a member of the Coast Guard who was killed in a helicopter crash due to flight controller negligence.
2003
Staff Sgt. Dean Witt suffers severe brain damage due to mistakes by medical staff while undergoing an appendectomy at Travis Air Force Base and dies three months later when his family removes him from life support.
(also in the video below)
2006
Marine Cpl. Yuriy Zmysly suffers severe brain damage after military hospital staff prematurely remove his breathing tube during an appendectomy.
2007
Marine Sgt. Carmelo Rodriguez dies from cancer after the military diagnosed his melanoma but for years failed to notify or treat him. 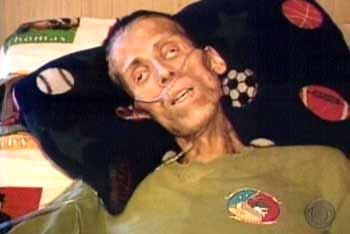 2008
The Carmelo Rodriguez Medical Decency Act is proposed by a New York congressman and triggers committee hearings on the Feres Doctrine but never gets to a floor vote in the House.
2009
Airman Colton Read has both legs amputated after surgeons at Travis Air Force Base accidentally nick an artery and allow him to bleed out on the operating table.
2010
The Supreme Court declines to hear the Zmysly case.
2011
The Witt family petitions the Supreme Court to hear its case. The court is expected to make a decision this month.
read more here
Is the Feres Doctrine fair

Posted by Kathie Costos at 9:14 AM