Families say "help" for PTSD is not there 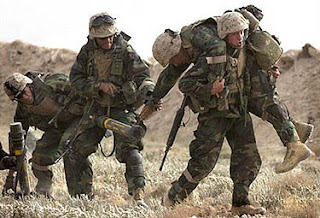 OEF stands for Operation Enduring Freedom. It began in 2001 when troops were sent into Afghanistan. Ten years later, the fact too many are enduring the emotional pain caused by war it should be clear that while many have returned from war, they have not found freedom from it.

If you read this, there can be little doubt that the claims the DOD make about addressing PTSD and combat stress, are nothing more than claims.

The 11 potential suicides would set a record at JBLM. There were nine suicides on the base in 2010.

This following statement is misleading at best, uninformed at worst.

"The leaders at Joint Base Lewis-McChord say the Army now has dozens of programs aimed at preventing suicide."

"Now" would suggest that they learned from the mistakes of the past and just addressed it. The problem is, they began all of these "programs" back in 2003 for Iraq and Afghanistan troops.

While they pretended there was nothing before this, the truth is, there were programs going all the way back to the 70's for Vietnam Veterans. Research started because they demanded it. To end up with this many suicides after they came out with the programs proves they are not working.

"Aimed at suicide prevention" is also misleading because while they have saved lives, the numbers would have gone down on successful suicides. As bad as the number of attempted suicides are, it is one more indication the "programs they now have" are not working any more than they worked back in 2003 when they came out with their "Battlemind" program.

They would not need suicide prevention if any of their other programs worked in the first place. They would have to be totally blind to the data coming into the Suicide Prevention Hotline proving yet again, the programs to help them after war, are just not there.

Then we have this report.

JOINT BASE LEWIS-MCCHORD, Wash. -- A record-setting month for soldier suicides has the U.S. Army taking the offensive, saying it's making every effort to prevent them.

But the families of some of those soldiers say the military is not doing enough.

The Army says suicide prevention is a top priority, with scores of programs in place to help identify someone in trouble. But several families of the soldiers who took their own lives say the programs are falling short, and their loved ones paid the price.

The wars in Iraq and Afghanistan are really taking their toll, both in the combat field and in the heads of soldiers. The Army says July hit a record for potential suicides at 22.

The mother of Spc. Jonathon Gilbert says her son committed suicide in Lakewood because he didn't want to return to combat after one tour in Iraq.
read more here

The fact redeployments increase the risk of PTSD by 50% for each time sent back into combat did not change the fact the DOD still does it.

"Just one month earlier, the wife of Army Ranger Jared Hagemann says her husband committed suicide on base because he didn't want to be deployed a ninth time."

Ten years of war and a ninth tour of duty? How could anyone think this would end well?

We keep heading onto YouTube links when there is a video of soldiers acting silly, dancing to the sound track of a pop star but we don't head onto videos about what they come home to. Yesterday there was a video of a dog laying by the casket of Navy SEAL Officer Jon Tumilson that made it into the emails of people around the world. It was touching but while families are touched by funerals everyday that did not need to happen, no one is watching their tributes or doing anything to ease their grief.

Ask them what they want after they had to bury a son or daughter because of military suicide and they will tell you they want no other family to suffer the way they are. Ask a wife after she has had to endure months or years after her husband came back from war changed as she stands near his casket what she wants. She will tell you that she doesn't want any more families to have to endure that pain or watch their children grow up knowing their Dad took his own life.

Dying in combat is considered to be the ultimate sacrifice. Families know the doorbell can ring at any moment. Dying after they have come home because of combat by taking their own lives is the direct result of the failures of this nation. How long will we accept the claims the DOD makes while they cannot endure coming home?

Posted by Kathie Costos at 8:03 AM