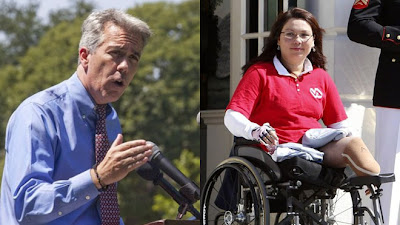 Republican Rep. Joe Walsh is facing a campaign trail backlash after he was caught on camera last weekend accusing his double-amputee opponent of talking too much about her military record.

The Illinois congressman, who is running against Iraq War veteran Tammy Duckworth, has defended his remarks and reiterated that he still thinks his Democratic opponent is a "hero."

But Duckworth has used the gaffe to hammer the incumbent congressman almost daily this past week, even prompting one veterans group to call for Walsh's resignation.

While Walsh says Duckworth is manufacturing outrage, that hasn't stopped the decorated Democratic candidate from turning his remarks into a centerpiece campaign issue.

Atop her campaign website is an online petition seeking support over the comments.

(CNN) – Democratic congressional candidate Tammy Duckworth, an Iraq war veteran and double-amputee, fired back at opponent Rep. Joe Walsh of Illinois after he criticized her for talking too much about her military service.

"It's very irresponsible for Mr. Walsh, as a sitting congressman, to try to muzzle war veterans and keep them from talking about their service," Duckworth said on CNN's "The Situation Room with Wolf Blitzer."
read more here