Army Chaplain with PTSD best weapon against suicides since he is not just unashamed of having PTSD, Maj. David Trogdon says, "I earned it." He didn't kill anyone since Chaplains do not even carry weapons, so that question is often useless in determining PTSD but we already knew that. Considering average citizens are among the almost 8 million with PTSD, that is obvious, or it should be. He pretty much rules out the other excuse of "lack of faith" that has been tossed around when an atheist ends up with PTSD. What he did was beyond what money can buy. He did it freely. He shared himself.


Chaplain with PTSD returns; shows troops there’s a way out of darkness
by Martin Kuz
Special to Stars and Stripes
Published: September 7, 2013

PADKHVAB-E-SHANEH, Afghanistan — The soldier lay on a stretcher, his lower legs a mash of pulverized bone and blackened flesh. Under the bright lights of the medical tent, doctors and technicians ringed his broken body. 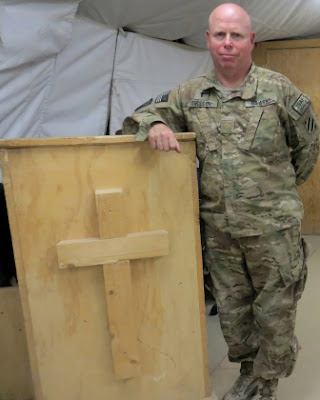 Maj. David Trogdon, chaplain of the 3rd Infantry Division's 4th Brigade Combat Team stationed in Afghanistan's Logar province, suffers from PTSD. "If I can help reduce the stigma, then it's worth me talking about it," he said.
MARTIN KUZ/STARS AND STRIPES


Maj. David Trogdon stood back a few feet, watching in silence. When he saw an opening, the chaplain came forward and squeezed the soldier’s hand in his own.

Alert and lucid, the soldier spoke in a low voice punctuated by sharp breaths. He had stepped on an improvised explosive device while on patrol with his platoon. He realized the severity of his condition and requested a prayer. Trogdon, head bowed, implored God to relieve the young man’s suffering and grant him strength in his recovery.

A short time later, the soldier flew from Forward Operating Base Shank in Logar province to Bagram Air Field, and from there he traveled to Germany and the United States. He lost both legs below the knee.

“It’s almost like having my kid in there,” said Trogdon, chaplain of the 3rd Infantry Division’s 4th Brigade Combat Team stationed at FOB Shank. “Afterward, you have to take a breath and think, ‘OK, what just happened?’ ”

Trogdon suffers from post-traumatic stress disorder. He ministers to most of the casualties who pass through the base’s medical clinic before pivoting to a task he considers as vital as comforting the physically wounded: providing solace to those who must continue fighting when injury or death steals a comrade.

Members of the soldier’s platoon had gathered at the clinic on that June afternoon.

Trogdon met with them after the medevac helicopter lifted off. Fury mixed with grief. He urged the men to open up to each other in the coming days.

“I tell our soldiers all the time that the combat stress is there, it’s in them and it’s going to come out one way or another,” said Trogdon, 52, of Camden, N.J. “The best way to get it out is by talking to someone, especially their buddies.”

He knows from experience the corrosive effect of repressing anger and anxiety. His return to war this year after three tours is motivated, in part, by a desire to show fellow troops that mental trauma can be tamed.

“Sometimes I get asked, ‘Does it bother you that people know you have PTSD?’ And I say, ‘No, I earned it,’ ” he said. “If I can help somebody else and help reduce the stigma, then it’s worth me talking about it.”
read more here

Posted by Kathie Costos at 4:43 PM