Thania Sayne was pregnant with her second child when her husband, a sergeant in the U.S. Army, was killed in Afghanistan. 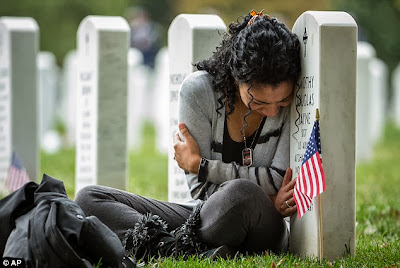 Grieving: Thania weeps at the grave of her husband, Sergeant Timothy Sayne, who was killed in Afghanistan

The Effingham, Illinois, mother wept at her husband's grave on Wednesday, the day before what would have been the couple's third wedding anniversary.

Two years after Sergeant Timothy Sayne was buried at Arlington Cemetery in Virginia, his widow has revealed she still doesn't know how to tell her young son that his father will never be coming home.
read more here
Posted by Kathie Costos at 6:40 AM