GODSMACK To Team Up With U.S. Armed Forces For 'What's Next?' Single Campaign
Blabbermouth
May 8, 2015 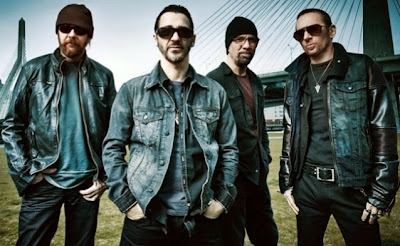 GODSMACK has selected "What's Next?" as the next single from its sixth studio album, "1000hp". A video for the track will be released soon.

Speaking to the K-Rock radio station in Syracuse, New York earlier this week, GODSMACK frontman Sully Erna stated about "What's Next?" (see video below): "We had a small problem with the label that they kind of went behind our back and they decided to just go choose a single ['FML'] when the whole time it was supposed to be 'What's Next?' And the best part about releasing the ['What's Next?'] single is we're gonna do a whole campaign, because the lyrical content of the song is about the only thing certain is life and death, but what's next?

So we're doing a whole campaign with the U.S. military — all the men and women of the U.S. Armed Forces, we're teaming together with them.

We're gonna do a whole campaign to help out homeless vets, to help out guys with PTSD [post-traumatic stress disorder], all that stuff.

We're just gonna do a whole thing for an awareness level, for a bit of an inspiration."
read more here


Pretty much sums up a lot of what has been going on when folks hear about a problem but don't even take the time to discover what needs to be done to help.

Sully Erna didn't even know it is PTSD. He said, "PSTD" as if it s a sexually transmitted disease. This came in at about 5:00 into the interview.

I just read the lyrics to What's Next. Not so great. Not so helpful and certainly not hopeful.

I know the struggles and the hardships. The feelings of being alone and lost. Stumbling to find understanding but finding folks walking away from conversations. I also know what it is like to find the help to heal, save my family, restore hope and happiness and be able to twist what seem abnormal to civilians into what is normal for us.

Bet you didn't know that you can be happy even with PTSD. Bet you didn't know that no one is stuck suffering and there is a flipside to all the doom and gloom awareness hordes have been collecting millions in donation to scream about. Anyone have a clue what the hell good that is supposed to do for anyone other than themselves?

Don't get me wrong. There was a time when raising awareness was exactly what was needed since veterans were coming home suffering but no one in the civilian world knew about. That time was after Vietnam veterans came home. Yep, that's how long ago awareness started.

It isn't as if they were the first ones with the combat wounds on their body and in their minds. It happened to every generation. There is so much "awareness" now about Iraq and Afghanistan veterans that no one seems to remember that yet again, everything else has just evaporated to the point where no one knows anything and all the research they fought for is back to step one.

Sucks the life out of the room to remind someone all the money for this study and that study, this program and that project have dismissed everything that worked while pushing what failed then wondering why suicides have gone up instead of down but ignoring facts sucks the life out of far too many veterans. Time to put some truth back into what they need to be reminded of.

I keep reading stories and hoping that finally someone will come up with a clue how to raise the awareness veterans actually need to be aware of only to discover it is all just more of the same smoke and mirrors tricking the eyes and picking the pockets masquerading as help.

If Godsmack really wants to help raise awareness they should start by actually becoming aware of what PTSD is at least enough to stop calling it PSTD.

Truth told I was really hoping it would be more like the one Five Finger Death Punch - Wrong Side Of Heaven especially the way it ended. That is the part that got to most veterans. Hope they still mattered!

Posted by Kathie Costos at 2:26 PM