Unless Patrick Murphy actually pays attention, forget about anything getting better. He's ready to expand Fort Hood's program calling it a role model of all things. Seriously?

January 3, 3016 Staff Sgt. Devin Schuette "left a note, she said, expressing love for his wife, their children, other family and for his country and the Army. “But he felt like he was broken,” she said. Schuette is survived by his wife, Tannie, and three children."

We could keep going on this but frankly, this other article from NBC sums up what the truth is about this "role model" at Fort Hood.

On September 7, 2015 NBC News told this ugly truth. Soldiers Waited Days, Weeks for Counseling at Fort Hood: Investigation Army says it’s understaffed, but that soldiers are getting the help they need when they need it


"Demand for care is not letting up. Records show counselors at Fort Hood are still handling between 11,000 to 13,000 appointments each month. That’s down only slightly from four years ago when they were seeing 13,000 to 16,000 a month."

The report went on to add


"But records show some soldiers still wait an average of 21 days for routine follow-up appointments. That’s longer than the Army’s target goal of seven days."

And then took a look at the Warrior Transition Unit


"Soldiers receiving behavioral health care include troops recovering at Fort Hood’s Warrior Transition Unit or WTU. NBC 5 Investigates teamed up with The Dallas Morning News for a year-long investigation that uncovered hundreds of complaints about treatment inside the Army’s Warrior Transition Unit’s (WTUs) that were designed to help injured soldiers heal."

This is why the claim of this or any other program being touted as a role model should make every military family cringe! It's all more of the same FUBAR that produced so many suicides in the military and in the veterans community.


"We need to model that on every post across the globe that has an Army soldier on it," said Murphy. 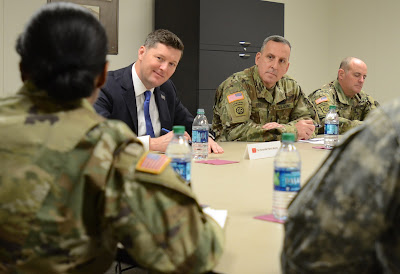 
FORT HOOD - It's often called the 'Great Place', and on Wednesday the Army's top civilian leader got a lesson on why.

"There was a lot of love in central Texas for Fort Hood and for the mission they take on for our country," said Patrick J. Murphy, acting Secretary of the Army. "To be back with soldiers who are really the tip of the spear here at Fort Hood was a honor and privilege."

Fort Hood was Murphy's first stop since taking over as the acting secretary. To start his trip, the Iraq War veteran suited up and joined the soldiers for their morning PT workout. He then spent the remainder of his time focused on the soldier and family programs.

"Fort Hood is really the model when it comes to the Soldier for Life programs," he said. "As acting Secretary of the Army we need to expand on those programs throughout the country."

Murphy was most impressed by the opportunities made available to Fort Hood soldiers transitioning out of the military. Fort Hood programs like 'Shifting Gears' and 'Veterans in Piping' teach soldiers specific job skills, and many have jobs lined up before they even leave the Army.
read more here

Posted by Kathie Costos at 8:30 AM