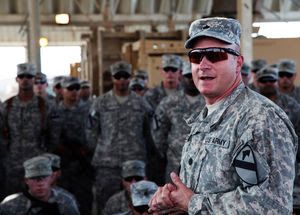 A former Fort Hood battalion commander who led 1st Cavalry Division troopers in Iraq during the final months of the Iraq War has died, an Army official confirmed Wednesday.

Col. Andrew Poznick was found dead Sunday at his off-post residence near Carlisle Barracks, Pa., where he was scheduled to soon join the faculty at the Army War College, said Carol Kerr, a spokeswoman for the graduate school that focuses on strategy for its military and civilian students.

“He was going to join the faculty this summer,” said Kerr, adding Poznick was currently pursuing a doctorate at Temple University in Philadelphia as part of an elite Army education program.
read more here
Posted by Kathie Costos at 2:17 PM