UPDATE, 11:15 A.M.: Sheriff Mark Overman has confirmed reports that the man involved in the stand-off is a Vietnam veteran who has been suffering some recent emotional issues. Family members called in the report, but the man has mostly made threats to himself. 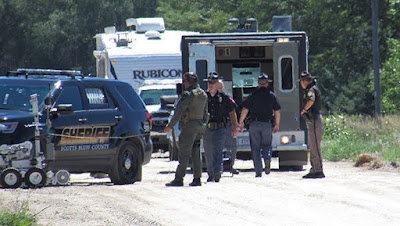 Neighbor Shana Emrick provided photos of SWAT team and bomb robot teams readying at the site of a standoff Saturday.

After more than 11 hours, a standoff at a rural residence ended with officers taking the man into custody.

Scotts Bluff County Sheriff’s deputies and the Scottsbluff SWAT Team took Daniel Converse, 65, of Scottsbluff, into custody at about 6:45 p.m. Sheriff Mark Overman reported authorities had obtained a warrant for the man, charging him with two felony counts of terroristic threats.

“I am just proud of all of the efforts of all of the officers that we were able to get this resolved. It took quite a while, but we got it resolved peacefully,” Overman said.

The standoff began at about 7:30 a.m. when Scotts Bluff County Sheriff’s deputies were called to a residence at County Road H and County Road 19, about six miles west of Scottsbluff. A woman reported to deputies that a man at the residence was armed with a hand grenade. He was outside of the residence when deputies initially arrived, but went back into the residence.

“They (deputies) challenged him and tried to get him to stop, but he retreated into his house,” Overman said. “He was holding something in his hands that deputies said was the size and shape of a grenade.”
read more here
Posted by Kathie Costos at 6:37 AM