Army Thinks They Did Nothing Wrong on Discharges?


The Army's report states that only 3,327 of the more than 22,000 soldiers who had been kicked out met that legal test. As a result, investigators ignored the rest of the soldiers — roughly 19,000 of them — who had mental health problems or brain injuries. 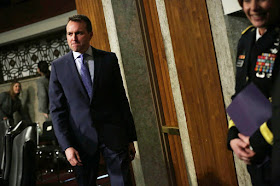 U.S. Secretary of the Army Eric Fanning ordered a review after an NPR
investigation found thousands of soldiers diagnosed with mental health
problems or brain injuries were dismissed for misconduct. But the new
Army report concluded that it treated the soldiers fairly.
Alex Wong/Getty Images

An Army review concludes that commanders did nothing wrong when they kicked out more than 22,000 soldiers for misconduct after they came back from Iraq or Afghanistan – even though all of those troops had been diagnosed with mental health problems or brain injuries.

The Army's report, ordered by Secretary Eric Fanning, seeks to reassure members of Congress that it's treating wounded soldiers fairly. But senators and military specialists say the report troubles them.

The Army's report is "unbelievable," says psychiatrist Judith Broder. "It's just bizarre." Broder was awarded the Presidential Citizens Medal by President Obama for organizing the Soldiers Project, a network of hundreds of psychotherapists and others who help troops and their families.
read more here
Kathie Costos at 4:36 PM
Share