I was just reading an article on veteran suicides on The Blade, Veteran-suicide epidemic has many causes. This was at the bottom of the article.


The suicide rate in the United States, and particularly among veterans, must remain a national priority. Addressing it requires recognizing and capitalizing on the successes of an organization that is often only criticized. More than this, it requires that we all take a clear-eyed view of the challenges that exist throughout U.S. culture that have contributed to the problem. Recognizing these problems, and acting on them, will likely save more lives than a bunch of push-ups.
David Kieran is assistant professor of history at Washington and Jefferson College in Washington, Pa.

He is right on that, and other parts of the article, however, it is far more worse than this History professor has managed to research.

For starters, veterans have been committing suicide all along, for generations, not just a decade or so. What we are seeing now has been allowed to happen so that the rest of us can delude ourselves into thinking we just did something to let veterans know we give a crap. Truth is, we made the problems they, along with families just like mine, fight on a daily basis worse. Easy stuff to do has made our lives end more tragically.

Here are some facts no one wants to face.

Start with these numbers from the VA on the numbers they came up with for veterans committing suicide going back to 1999. 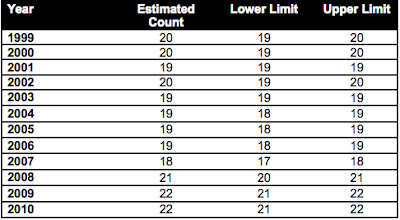 Now add in two other numbers. In 1999 the US Census had the number of veterans as this,

Census 2000 counted 208.1 million civilians 18 and older in the United States.1 Within this population, approximately 26.4 million or 12.7 percent were veterans. 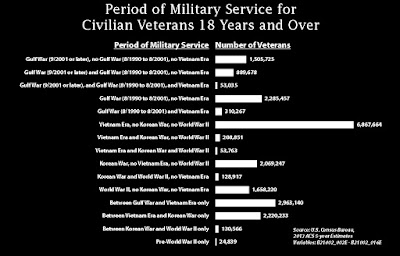 Without talking about military suicides taking place at consistent levels of over one a day, at the same time the number of enlisted has dropped by the thousands, the new generation of veterans received the same training, yet their suicide numbers have also skyrocketed past the civilian peer rate. That is something else we have no excuse to ignore, but we do.

With all this in mind, consider the folks you know running around the country just slamming the VA, when every report has stated veterans are less likely to commit suicide while they are going to the VA for help. Instead of #fightingforveterans to have the VA working properly, the members of Congress have let it be destroyed from within and now they are talking about privatizing it. Why? Why should they be allowed to consistently fail our veterans? Why have we allowed this to go on without demanding they be held accountable for all the bills they write to get their names in the public spotlight while pretending they have actually done some basic research to know what they are doing? Any clue as to why we let it happen?

Ok, bad enough? Not even close. For the simple facts we have less veterans living yet the same number committing suicide, those numbers are only part of the truth. The plain, simple, ugly truth of what we allowed to happen. These are the number of veteran in crisis calling the suicide prevention hotline and the numbers that could have been added to what we got wrong.

So, are you angry enough to #fightforveterans yet or are you going to drop and do some push-ups so you can sleep at night thinking you just did something that will matter to anyone else but yourself?
cross posted on Combat PTSD Wounded Times
Posted by Kathie Costos at 8:48 AM