"He's going to be free": Sea turtle named for deceased Army Ranger released at Virginia Beach Oceanfront
The Virginian-Pilot
By Katherine Hafner
May 19, 2017

The sea turtle was the first catch James Spray had made all day. 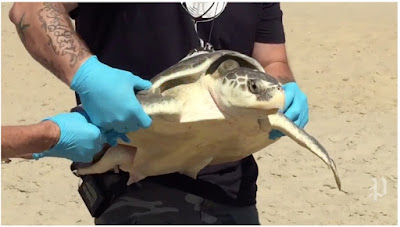 At the Buckroe Fishing Pier in Hampton on Monday, Spray had just about given up, when his hook snagged a juvenile Kemp’s ridley turtle – the world’s most endangered sea turtle.

In the hands of the other anglers it flopped around and struggled, but in Spray’s hands the turtle was still and calm.

It “just seemed so peaceful,” he said.

So attached did Spray become to the turtle in the days that followed, that on Friday he gathered with the Virginia Aquarium’s Stranding Response Team at the North End to release it back into the Atlantic.

For him, the turtle he dubbed Ranger Tan was more than just a peculiar catch.

Something about it connected him to his Army friend, Jason Benchimol, who died of a heroin overdose a few months ago. The name – Ranger Tan – refers to Benchimol’s status as an Army Ranger and the distinctive tan beret Rangers wear (the Virginia Aquarium and Marine Science Center has been naming each rescued sea turtle after a Crayola crayon color). The men met in the military in 2008 and became close friends over the years.

His death “was a terrible blow,” said Spray, who added that his friend suffered from “severe” post-traumatic stress disorder after combat overseas. “He was much better than the disease.”

The two recently had undergone treatment together at the Hampton Veterans Affairs Medical Center, where Spray is living, though he owns a home in Moyock, N.C.

Inexplicably, catching Ranger Tan became a way to for him reconnect with Benchimol – there was something about the way the animal was at peace.
read more here

PTSD is not now, nor has it ever been, a "disease" and that is a major problem. If you think all that is "wrong" with you came from you, then where is the hope to heal? If you know the only way you ended up with PTSD is because you survived something that could have killed you, then you know, it happened to you!

Post-traumatic stress disorder (PTSD) can develop after a very stressful, frightening or distressing event, or after a prolonged traumatic experience.
Types of events that can lead to PTSD include:

They forgot to add in occupations like First Responders rushing to what the rest of us run away from!

You can only heal if you fight to take back control of your life! 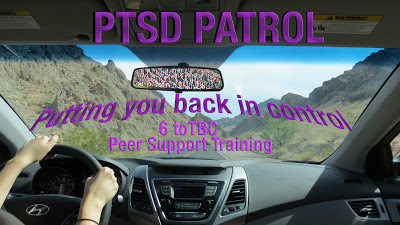 PTSD Patrol
Posted by Kathie Costos at 7:13 AM