In 1993 my husband was tested for Agent Orange. We'll never forget the words the doctor uses after the test was done, "No adverse health effects yet." Yes, those words "yet" have haunted us ever since, knowing that one day, there would be and there was. I thank God everyday that we have not heard the words "cancer" but it hangs over us all the time. If you think for a second we have lost all we had to lose by those who fought the Vietnam War, you are not even close to knowing that price yes yet to be paid in full.


"If Jerry, God forbid, doesn't beat this thing, his wife Edie would lose the benefit that her husband earned," Schumer said.

VALLEY STREAM, Long Island (WABC) -- They put their lives on the line for our country - in a conflict that bitterly divided the nation.

Now, some Vietnam veterans are being diagnosed with cancer that may be linked to their service, but they're being denied care by the Veterans Affairs.

Jerry Chiano was only 19-years-old when he went off to fight in the Vietnam War. Years later, he was diagnosed with throat cancer and then more recently, bile duct cancer.

"Most people get no symptoms. They turn yellow. They get a little pain. It's already stage 4," Chiano said.

It's a rare cancer that many believe stems from parasites in Southeast Asia's waterways, but the Department of Veterans Affairs does not recognize it as a service connected illness.

"Jerry, who served our country, should not have to fight a second war to gather scientific facts about bile duct cancer," Schumer said.

Schumer called on the National Academy of Sciences to launch a study examining the correlation between bile duct cancer and parasites that veterans may have been exposed to in Vietnam.
read more here 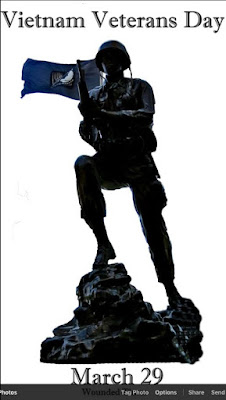 And every other day as well.
Posted by Kathie Costos at 8:53 AM