The Only Number You Need on Veteran Suicide is Yours

More Than "Just a Number" to Us

On WLKY News, that was the headline, which it turned out, wasn't much of a story, nor factual.

This is the image, 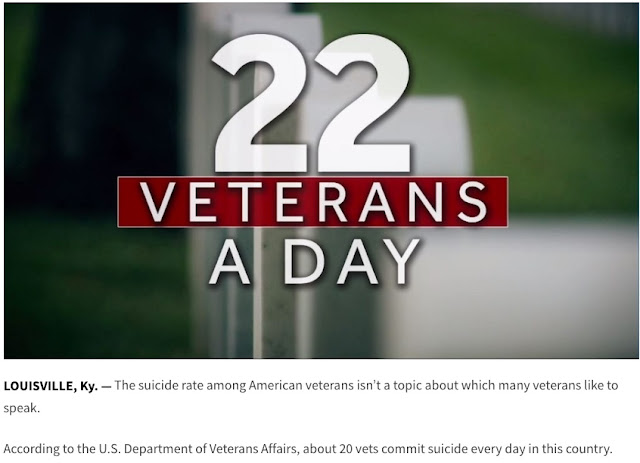 "According to the U.S. Department of Veterans Affairs, about 20 vets commit suicide every day in this country."

We'll start with that part. Is it 22 or 20? Shouldn't that matter? Shouldn't it matter that when the VA had the number of veterans going from survivor or combat to committing suicide, it was limited data from just 21 states. Guess they didn't matter enough that folks doing the talking didn't bother reading the report itself.

I've actually heard "awareness" raisers say the words, "Its just a number" when trying to defend their use of a slogan, as if they were not worthy of reading the report itself.

When the VA did the followup report, the number was reduced to 20 a day, but for those of us actually paying attention and regarding the report as important enough to read, we knew it was the same number as the VA used for 1999. 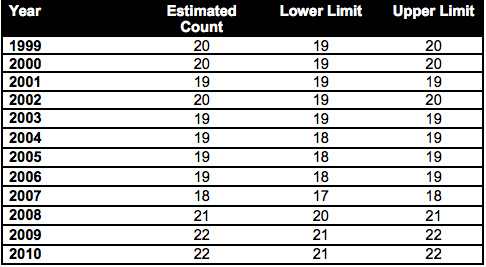 
Key findings from this year’s report include:

 There is continued evidence of a high burden of suicide among middle-aged and older Veterans. In 2014, about 65 percent of all Veterans who died by suicide were age 50 or older.

 After adjusting for differences in age and gender, risk for suicide was 21 percent higher among Veterans when compared with U.S. civilian adults. (2014)

 After adjusting for differences in age, risk for suicide was 18 percent higher among male Veterans when compared with U.S. civilian adult males. (2014)

 After adjusting for differences in age, risk for suicide was 2.4 times higher among female Veterans when compared with U.S. civilian adult females. (2014)

And the problem on that one is while there are over 5 million less veterans alive in this country now than in 1999, the number is the same. Follow that up with over a decade of people claiming they are doing something new, which, again, isn't factual either.

This is from the article,


A unique movement is underway to help those who deserve it the most.
“I was two months into being 17, and joined the Navy Reserve,” Vietnam veteran Frank Thompson said.

It isn't unique. Another Vietnam veteran started doing peer support from a spiritual standpoint, which experts knew was necessary. Point Man International Ministries started working with all generations of veterans and their families. The key number here is 1984 and is still going on. I'm a part of this effort to empower healers to do the work that anyone wanting to change the outcome can do. Sorry "awareness raisers" but takes a lot more work to change something than just talk about the problem.

This is all, too often, heartbreaking work, especially if you are actually paying attention to reports and investing the time to learn the truth. It is always frustrating when searching for solutions or even hope that we can change the outcome, only to discover a poorly written news article getting in the way.

Is this really mattered, Morgan Lentes would have been able to decide to at least invest the time in finding an image with the same number that followed it on the article she wrote.

It also looks like this article does not have anything to back it up.


"Many of the vets they’re helping did not want to take part in this story. Alexander said many of them are too ashamed to admit they are struggling."

Is it possible that the veterans do not want to talk to a reporter? Sure! Most won't. Most of the veterans and families we work with are private people looking for help. Then why do the story if it cannot be verified?

Ok, so, we know peer support works but what works best is for one generation to help the other, side by side as not just an example, but so the newer veterans learn easier from their experiences. After all, our generation took this on when the internet did not exist and we had better results.

One more thing on veterans talking about what works publicly, is this Marine.

Keep in mind that just because we don't pull stunts, call in reporters or hold massive fundraisers, that isn't because we don't believe in what we're doing. It means we believe the work is a lot more vital than anything else!

The only number you need to know about veterans committing suicide is yours! There is absolutely no way to ever know exactly how many veterans commit suicide. How about changing the conversation to what we really do know?

We know the stigma is alive and well while they are not. They did not know what PTSD actually was or that they could take control of their lives back instead of taking their own lives.

We know they were part of a military family, able to depend on each other, knowing others were equally willing to die for them, but not knowing they would be able to listen to them.

We know that when it comes to veteran families left behind, the only number they care about is on the tombstone while wondering about what could have changed the expiration date.
Posted by Kathie Costos at 7:28 AM