WASHINGTON — The Defense Department on Monday issued a sweeping policy change to afford more leeway to veterans seeking upgrades to their other-than-honorable discharges.
A memorandum dated Aug. 25 instructs the Army Review Boards Agency — the office charged with changing military records — to give “liberal consideration” to veterans looking to upgrade their less-than-honorable discharges, or “bad paper,” because of mental health conditions or traumatic brain injury, sexual assault or sexual harassment and outlines what should be considered when deciding an upgrade.
In 2014, former Secretary of Defense Chuck Hagel had ordered the Army Review Boards Agency to give consideration to veterans looking to upgrade their less-than-honorable discharges because of post-traumatic stress disorder. The new memo expands on Hagel’s order after years of veterans asking for government recognition that troops are, in some instances, affected by service-related mental health conditions that change their behaviors and lead to disciplinary problems.
“This new guidance is something that veteran advocates should be really excited about – it’s what we’ve been asking for from the Pentagon for years,” said Kristofer Goldsmith, an Iraq War veteran who has fought for 10 years to change upgrade procedures. “This memo is filled with signals that there may yet be hope for the thousands of veterans who have been unfairly suffering the effects of bad paper.”
read more here 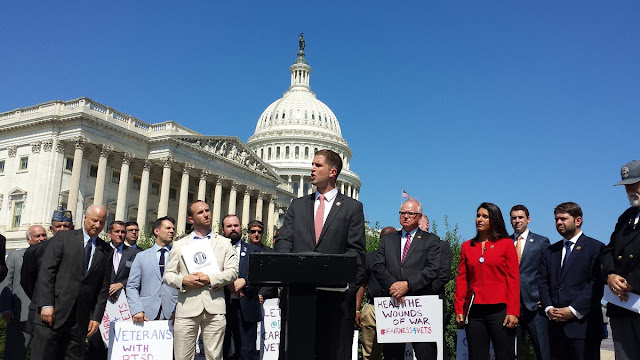 Veterans advocates rallied on Capitol Hill Tuesday to urge lawmakers deal with the problem of so-called "bad paper" discharges that prevent some struggling veterans from receiving health care, and urged the White House to intervene while the legislative process drags on.

"It's disturbing to see this issue come back," said John Rowan, president and CEO of Vietnam Veterans of America. "We saw half a million questionable less-than-honorable discharges during the Vietnam era. And to think that today there are as many as 300,000 more since Sept. 11, that's a disgrace."

Senate lawmakers have already included legislation in the annual defense authorization bill to require the Defense Department to review and improve the discharge process after numerous reports of troops being forced out of the ranks without veterans benefits due to infractions like suicide attempts and substance abuse related to post-traumatic stress disorder.
read more here
Posted by Kathie Costos at 4:22 PM