Real Numbers on Veteran Suicides Getting Closer to Know

California tracking suicides ending the lives of veterans will bring us closer to knowing how many, but the truth is, we will never really know for sure.

Traffic deaths, overdoses, suicide by cop, the list goes on. None of them are counted as suicides perfectly. Too often it is simply not known for sure if they did not leave behind a note to the family they left behind.

When we use numbers like "22" or "20" it paints a rosier picture of what this "grateful nation" finds acceptable. If no one knows how many and they push all the "awareness" propaganda when the veterans they miss are only missed by their families.

Once California begins counting veteran suicides, the VA’s estimate of 22 deaths a day could likely double, said Tom Donwen, state and national chairman of suicide prevention for AMVETS. “This bill is critical to suicide prevention and awareness for veterans,” he said. 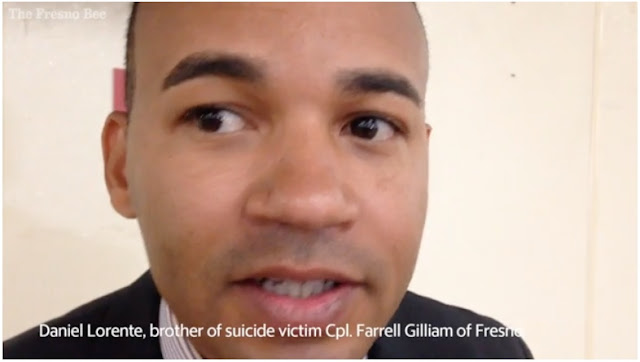 A new law requiring California to track veteran suicides was applauded Friday by the two Fresno legislators who authored the bill, the brother of a fallen Marine and a Visalia assemblyman and veteran who had a personal reason to support it.
“This is the first step in the right direction,” said Assemblyman Devon Mathis, R-Visalia, a former sergeant in the Army National Guard who served two tours in Iraq.
Mathis said one of his fellow veterans, who welcomed him home after his second tour in Iraq, died by suicide a few months ago. “He was the happiest-go-luckiest guy I’d ever met,” he said.
His death can now be counted, Mathis said. “This allows us to track this so my brothers and sisters in arms and their families don’t fall through the cracks.”
read more here

Posted by Kathie Costos at 7:20 AM