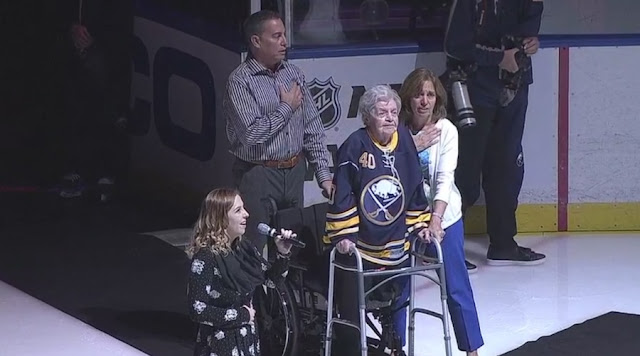 Marian Morreale, a Coast Guard veteran, was honored during the national anthem at the Buffalo Sabres home opener on Friday, October 6 2017.SCREENSHOT VIA NHL

Marian Morreale has been practicing how to stand for the last three months. She is a 94-year-old World War II veteran and her left leg was amputated last year.
But she practiced standing so that she could when the national anthem  opening game of the Sabres tonight.
She is trying to make a point.
"I think for these young athletes and the salaries they make, they should stand for the national anthem," she said. "But I don't think our president should use that word, SOB."
read more here
Posted by Kathie Costos at 3:52 PM