Note to firefighters: If people did not want your help, you'd be out of a job. Think about that for a second. They do not just have to need help, but want it enough to call for you to come and help them. 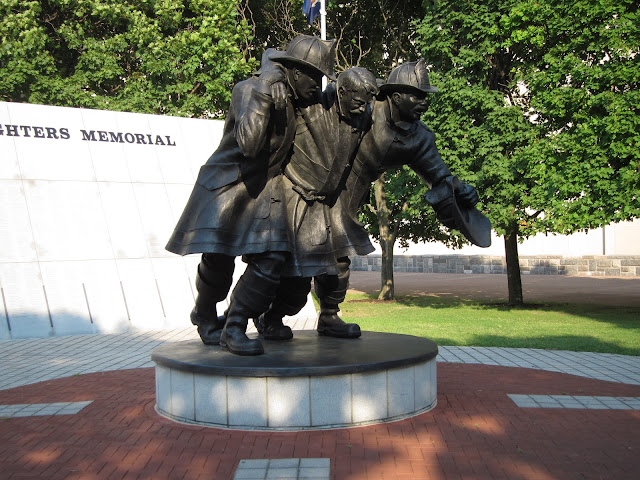 When I was at the Point Man Conference at the Adam's Mark hotel in Buffalo over the weekend, there was a Firefighters Ball at the same hotel.

During a break a firefighter noticed the patch I was wearing and we talked. I told the firefighter who we were, how long we've been working on PTSD and that help is out there. All they have to do is ask for it.

He said it isn't that they don't need it, they don't want to ask for it. That shows how little they understand about what PTSD is. If they knew, then they'd never waste another second without getting help to be the best they can be for their families, other firefighters and the community they serve.

I had to get back to the conference and he had to go to the ball. Had we had more time, I would have explained that they won't ask for help because they blame themselves for having PTSD. Somehow, somewhere along the line, they, like veterans, got it into their heads there was a weakness within them.

Ya, I know but that is what they think. I guess no one ever told them that it wasn't weakness that was causing them pain. It was the strength of their emotional core that made them feel it so much stronger than others.

The very thing that allows them to rush into burning buildings while everyone else is running away, trying to do whatever they can to save someone else, prevents them from being able to save themselves.

If they understood it properly, they'd know that PTSD only comes from trauma. They'd didn't cause it but they were hit by it.

They'd know that the word "trauma" is actually Greek for "wound" and thus, be able to accept the reality it happened to them.

They'd know that if they looked at it properly, they'd understand that the people they risk their lives for, not only need their help, they want it. They are unashamed to admit they cannot save themselves.

They'd acknowledge that they do not look down on the strangers they help, but find their lives so valuable, they will do anything to save them.

So, then why don't they see, that their own life is valuable too and trust those they serve with enough to talk about what they need from them?

Here's a video I did several years ago. I did it for National Guardsmen to help them heal PTSD and understand it better. I found out at another conference Chaplains were using it with police officers and firefighters and it worked.

Here's another one you should watch.

Posted by Kathie Costos at 4:47 PM