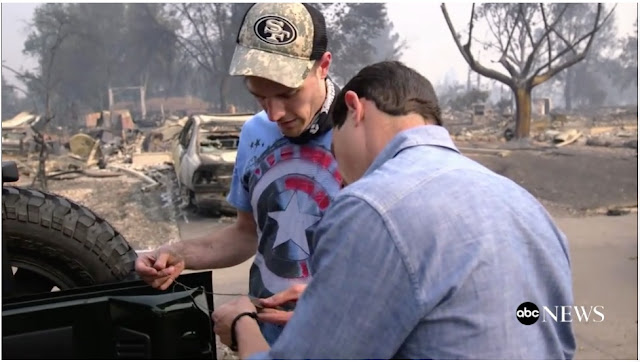 An Iraq veteran spent this week sifting through the charred remains of his parents' California house to find one of his most precious items: the dog tags he deployed with.

While Brady Harvell's Santa Rosa home survived the deadly wildfire that tore through the area, his parents, who live nearby at the house he grew up in, lost everything.
Harvell said his parents' house had already filled with smoke by the time they woke up. They grabbed their two dogs, two cats and fled. They didn't have time for anything extra, like his baby pictures, he said.
"Everybody I grew up with ... everybody's house is gone. It's absolutely nuts," he told ABC News.
read more here
Posted by Kathie Costos at 4:34 PM