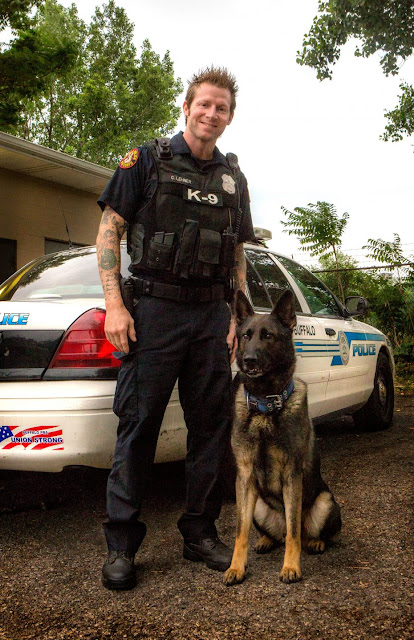 Buffalo Police Officer Craig Lehner with his dog Shield at the K-9 training area on Louisiana Street. (Photo courtesy of Shannon Davis)
Lehner, 34, a nine-year veteran of the police department, has been missing since he vanished Friday during a training session for Buffalo police divers in the Niagara River.

For the past four days, multiple local, state, federal and Canadian agencies have joined forces in a furious and difficult search.

Zoll introduced Davis to Lehner, who joined the K-9 unit about a year ago. Lehner told Davis about his dog Shield, a 4-year-old German shepherd purchased by the Buffalo police from a training center near Rochester. As they spoke, Davis said, the dog – intent and preoccupied – wandered in circles in the training area, nose down, sniffing the ground. "He never stopped working," Davis said of Shield.


Lehner served in both Iraq and Guantanamo Bay with the Army National Guard. Davis photographed him with Shield, then spontaneously asked if she could take one portrait of Lehner, alone. Looking back on it, she is grateful for both images.

Posted by Kathie Costos at 8:31 PM