O'Keefe took his own life last month after a lengthy battle with post traumatic stress disorder (PTSD). In the weeks since his death, other officers suffering from PTSD have spoken up about the battle they endure outside of work hours. 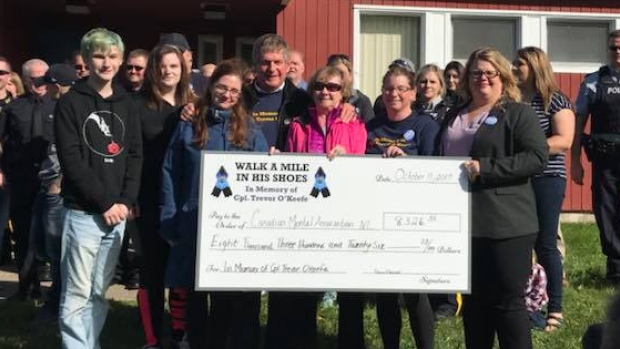 Family members of RCMP Cpl. Trevor O'Keefe were in Clarenville on Wednesday for a walk to raise money for the Canadian Mental Health Association. (Stephanie Marsden)
Fourteen years after RCMP Cpl.Trevor O'Keefe helped her escape domestic violence with her three children, Donna Hancock wanted to help his family.
On Wednesday, hundreds of people assembled in the streets in Clarenville to walk for the beloved officer, who took his own life Sept. 11.

Together, they raised $8,326 for the Canadian Mental Health Association.
"Trevor helped me out over a decade ago when I had a very difficult time in my life," Hancock told CBC's St. John's Morning Show. "I left a very abusive relationship with three small kids. Walking back and forth to work, he always checked in on me."
The walkers were led by a police car, fire truck and ambulance. Several police officers took part in the walk, including coworkers of O'Keefe.
Members of the O'Keefe family — including his parents, Pierre and Biddy, and children, Liam and Melissa — were in attendance.
read more here
Posted by Kathie Costos at 4:22 PM