(My two cents is that this article is very true, but also applies to man on social media.)


"Miller, who treats sufferers of Post Traumatic Stress Disorder, says the last thing you should say to someone who’s been through a trauma is "'You’re lucky to be alive.'" 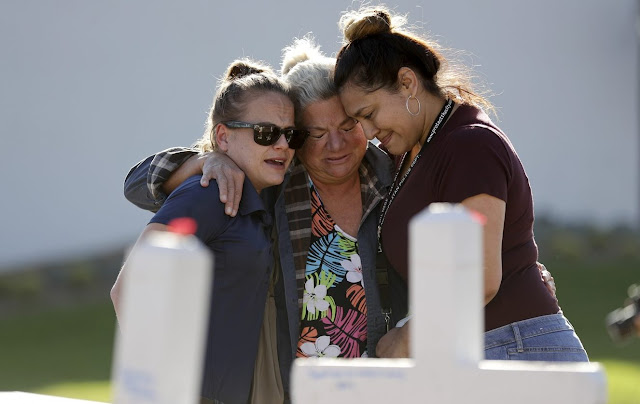 Melissa Gerber, left, Nancy Hardy, center, and Sandra Serralde, all of Las Vegas, embrace as they look on crosses in honor of those killed in the mass shooting Friday, Oct. 6, 2017, in Las Vegas. A gunman opened fire on an outdoor music concert on Sunday killing dozens and injuring hundreds.(AP Photo/Gregory Bull)

VANCOUVER (NEWS 1130) – A local psychologist is worried about the impact on survivors of the Las Vegas massacre, saying some TV reporters are deliberately inciting an emotional response with their interview questions.
Doctor Lawrence Miller says it’s not a good idea for reporters to act as amateur psychologists for survivors or first responders who might be traumatized.
“So that’s really risky. If you go up to someone in the crowd in Las Vegas and you say, ‘Oh, you know, you’re lucky to be alive,’ the person may be just kind of still trying to formulate, like, what all this means.  Well, what the person hears is, ‘I could have been killed’ and that is the kind of thought process that can begin the development of post-traumatic stress disorder.”
He adds certain questions are deliberately asked with the goal of prompting tears, but that’s dangerous when dealing with someone who’s mentally fragile.
“When someone’s been through trauma like that, the worst thing you can do is start saying how they should be feeling and ‘You must be the luckiest guy alive, you know, you’re lucky to be alive.
read more here
Posted by Kathie Costos at 4:12 PM