HINT TO CONGRESS: VETERANS WANT THE VA TO WORK AND YOU GUYS TO ACTUALLY DO YOUR JOB AND MAKE SURE IT DOES! STOP SELLING THEM OUT AND PUTTING THEM INTO THE MESS THE REST OF US HAVE TO DEAL WITH!!!!

Veterans call program to get health care with civilian doctors 'a disaster,' broken

Veterans from around the state expressed frustration over the Veterans Choice program, meant to increase access to health care, during a listening session in Helena on Monday night. 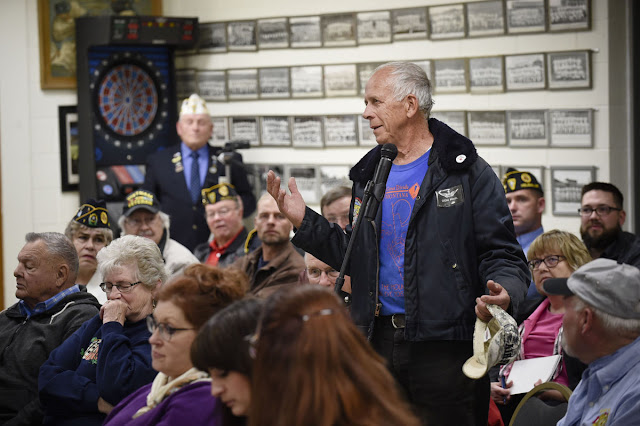 Veteran Don Paul discusses the tribulations he endured while trying to acquire new prescription glasses during a town hall meeting at The American Legion Post in Helena.Thom Bridge, thom.bridge@helenair.com

Nearly 50 veterans came to American Legion Post No. 2 to talk about their experiences with Veterans Affairs Department health care. The town hall is one of about a dozen the Legion will hold around the country this year to gather feedback to share with state congressional delegations and VA officials.
“That Choice is broke, broke, broke,” said veteran Tom Johnson, who said he was employed by the VA for more than three decades. “The VA has gone downhill drastically in the last eight years.”
read more here
Posted by Kathie Costos at 4:53 PM