“I know I wouldn’t be here today if veterans court didn’t exist," Mills said while holding back tears. "I probably would be in jail, but they gave me hope.”

INDIANAPOLIS, Ind.  - A relatively new program recognized the work of 13 veterans Friday who have suffered because of their time in the military. 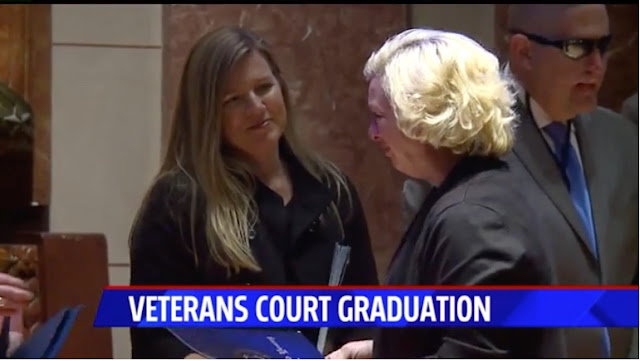 Veterans court allows service men and women to enroll in treatment, allowing them to stay out of jail and possibly see their criminal charges dropped.
Vets in the program were recognized for graduating with an hour-long ceremony at the Indiana World War Memorial auditorium.
The Indianapolis Veterans Court (IVC) celebrated its second anniversary of serving men and women. Including Friday's ceremony, 21 veterans have graduated from IVC.
“Our program is a treatment-oriented court," said Marion County Superior Court Judge David Certo, who also runs the IVC. "You go to treatment, the court helps support you and encourage you, and hold you accountable in doing that because you get better outcomes when you go consistently to treatment.”
The program is completed by veterans in phases, and can take 12 to 18 months overall.
read more here
Posted by Kathie Costos at 8:29 AM