COLORADO SPRINGS, Colo. (The Gazette) - An internal Department of Veterans Affairs watchdog told Congress Thursday that nine in ten PTSD patients at a Colorado Springs VA clinic had their wait times "inaccurately recorded."
Patients in Colorado Springs waited weeks and months longer for care than was recorded in VA records, making some of the agency's worst wait times in America even longer.
read more here 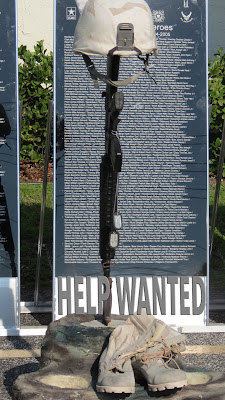 And gee, no shocker members of Congress pushing for the VA to be privatized slammed the VA instead of apologizing for not fixing the problems that have been reported for DECADES!

But here is a better report from FOX 31

and in that report there was this,

Smothers went to Republican Sens. Ron Johnson of Wisconsin and Cory Gardner of Colorado, saying he had uncovered the unauthorized lists on spreadsheets in the VA computer system.They requested the investigation along with other members of Colorado’s congressional delegation, including Mike Coffman.“Putting veterans on secret waitlists is not acceptable. The VA should implement changes to provide the highest quality care for our veterans and hold wrongdoers accountable,” Johnson said in a statement.

You can read more of that here

But whatever you read, consider the following.

2008
Associated Press report: "Peake promised to "virtually eliminate" the current list of 69,000 veterans who have waited more than 30 days for an appointment to get VA medical care.

FROM NPR The inspector general of the Department of Veterans Affairs has affirmed that some 1,700 patients at the Phoenix VA hospital were put on unofficial wait lists and subjected to treatment delays of up to 115 days.In an interim report released Wednesday, the inspector general's office reported it had "substantiated that significant delays in access to care negatively impacted the quality of care" at Phoenix HCS.

Play a game of seek what they hide and discover how long they have been failing the veterans.
(Hint: You'll have to track it back to the Revolutionary War)

Posted by Kathie Costos at 4:38 PM