After Losing Limbs, Veteran Got Life Back

After he lost his limbs, Dave Riley found a new purpose for his life


"It was my missing ingredient," he says. The DAV "exposed me to adrenaline again," and gave him his life back. 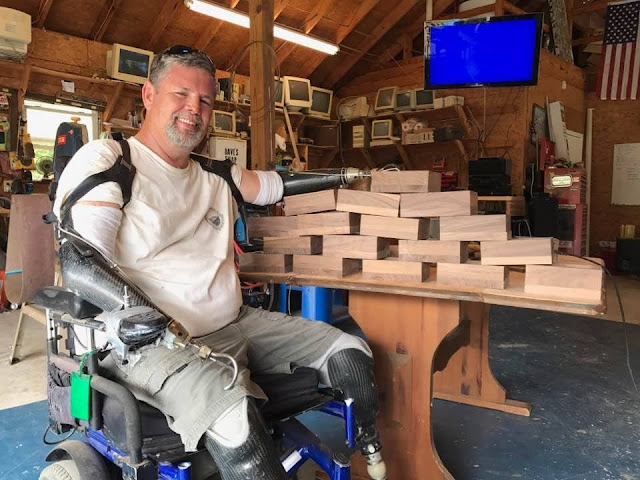 workshop behind his house in Semmes, Ala.

Every morning, Yvonne Riley helps Dave, her husband of 30 years, get himself together. Literally.
Before they leave the bedroom of their home in Semmes, Yvonne helps him brush his teeth, she shaves his face and she helps him put on his prosthetic arms and legs and get dressed. By now, she has the process down pat. She's been doing this for the past 20 years.
In 1997, Dave and Yvonne had taken their family - they have two daughters and a son - on a rare vacation to Dauphin Island. Dave remembers opening the door to their camper after they arrived. He felt the wind blowing on his face, and he felt something else, he says: "an impending feeling of doom."
By the time he woke up the next morning, his body was going into septic shock. A tall, strong Coast Guard rescue swimmer and emergency medical technician, Dave had contracted a bacterial infection that was trying to kill him. One of the doctors treating him told Yvonne he wasn't going to make it.
He spent the next 30 days in a medically induced coma, with Yvonne making all his medical decisions for him - including the amputation both of his arms below the elbows and his legs below the knee. He was hospitalized for two more months.
He sold his woodworking tools. He got rid of his boat and his trailer. "I didn't think I'd need them anymore," he says.
read more here
Posted by Kathie Costos at 12:03 PM