Airman Took a Knee, After Anthem

If you still think that taking a knee during the National Anthem is not disrespecting the troops, read this story. This Airman not only stood for the anthem of the US and the UK, he was slammed for taking a knee instead of fainting!

Maybe now you'll understand how the stunt the football players are doing hits the troops and veterans. The National Anthem was written for them after the war of 1812, when yet again, the troops defended this country and united a nation after the Civil War. Want to protest? They gave you the right to do it. So why protest against them? 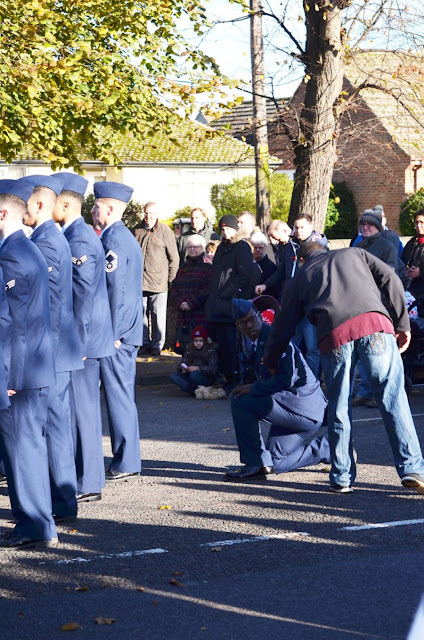 An airman, while part of a ceremonial detail from RAF Mildenhall, stepped out of the formation and took a knee when the music to reveille began playing during a Remembrance Day ceremony in Mildenhall, England, on Sunday, Nov. 12, 2017. Air Force officials said the airman felt faint, but others on social media interpreted the photo as a protest. The airman previously stood and saluted during the U.S. and British national anthems.COURTESY PHOTO

RAF MILDENHALL, England — An airman attacked on social media for appearing to take a knee in protest during a Remembrance Day service near the Mildenhall War Memorial on Sunday morning was just feeling faint, Air Force officials said.
The airman first class from RAF Mildenhall, while participating in a ceremony detail in dress uniform, stood and saluted during the U.S. and British national anthems, according to photos contributed to Stars and Stripes. He stepped backward out of the formation and fell to a knee when the music to reveille began playing.
Feeling faint after locking the knees during formation “can be a common occurrence for airmen participating in these types of events and at no time did this airman display or intend any disrespect to either the U.S. or U.K. servicemembers the event was honoring,” the base said in a statement on Monday.
The airman’s name is being withheld because of threats he has received and concerns about his safety, the base said.
read more here
Posted by Kathie Costos at 5:33 PM