War at home
After 10 years of distinguished military service — including tours in Iraq, Afghanistan and the Persian Gulf, and various decorations as a squad leader — Army Staff Sgt. Michael Keith Coon took his own life in 2015. 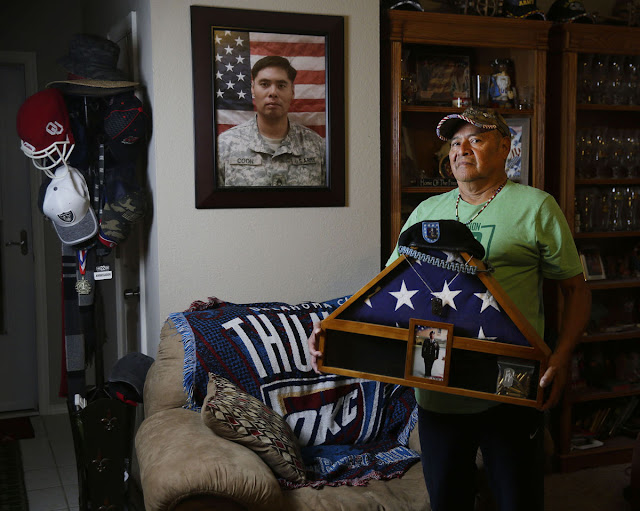 Michael D. Coon holds the flag of his son, Staff Sgt. Michael K. Coon, who committed suicide after 10 years of service in the Army and multiple deployments to the Middle East. MIKE SIMONS/Tulsa World

At a veterans appreciation event a few years ago, Michael K. Coon made his grandfather a promise.
Pointing to the combat infantryman badge on Phillip Coon’s uniform, he said, "Grandpa, I'm going to have one of those, too — just like the one on your chest,” recalled Michael’s father, Michael D. Coon.
He said it was the first time that his son, then 23, had indicated he planned to go into the military.

Phillip — a decorated World War II veteran who survived the infamous Bataan Death March — couldn’t have been more proud of the young man he still referred to as “my baby grandson.”
Going on to enlist in the Army, Michael K. Coon would represent the third generation of his family to serve, carrying on a tradition that, as a source of pride to the Coons, ranked second only to their Muscogee (Creek) heritage.
Recently, during a visit to Fort Gibson National Cemetery on Veterans Day, the memory of Michael K. Coon's promise was again on his father’s mind.
For Michael D. Coon, Fort Gibson will, from now on, be the site of an annual pilgrimage.
What more appropriate way to observe Veterans Day, Coon said, than by visiting the graves of his father, Phillip, and son, Michael.
read more here
Posted by Kathie Costos at 7:57 AM