Hardest Battle is After War And We Still Lose More

It isn't new. It is as old as war itself. You can read accounts of what PTSD does within ancient accounts of war and even in the Bible. Without reading the term itself, it is all there.

Today we read about veterans of Afghanistan and Iraq losing their battle after war, but the overlooked facts make it all the more heart-wrenching to anyone paying close attention to all of this.

Prior to the War on Terror, all generations of veterans came home to battle the terror of the night and flashbacks of combat. This generation is no different from them, but social media has made it seem as if it is all new.

These are all repeats of stories we heard over the last 4 decades from our community members. That is unacceptable considering this generation has received more than any other generation to fight for their own lives.

So why are they still losing that fight?

"We had 20 that were killed in action in Afghanistan and we've already surpassed that in suicides since we've came back. It's terrible." Ryan Terrana 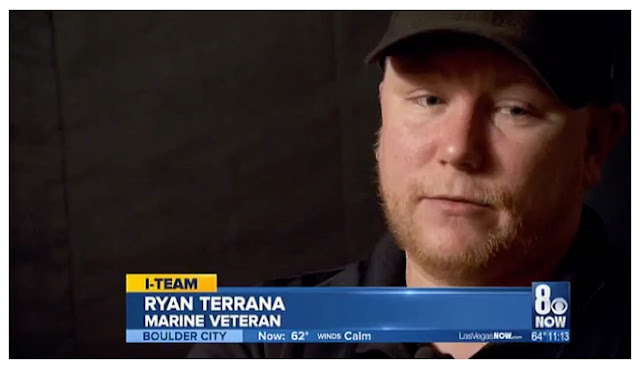 LAS VEGAS - A group of marines deployed nearly 10 years ago is known as one of the hardest hit battalions.
According to the U.S. Marine Corps, within just eight months in Afghanistan, more than 20 marines and sailors were killed and 80 were seriously injured.
But when they returned home, the loss didn't stop.
Ryan Terrana went to war at 19-years-old. First in Iraq in 2007. Then in Afghanistan in 2008.
He was part of the 2nd Battalion, 7th Marines, a light infantry unit on the front lines facing combat.
"There's nothing else like that," Ryan Terrana said. I'll tell you that."
Some in the unit returned home with injuries, others were killed in action.
"I lost a really good friend. It was actually his anniversary and he has three kids and had a wife and it's like, I struggled with that for a long time. You know, why him? Why someone that has a family and all that? I mean granted, I have my family and stuff, but they just lost their dad," Terrana said.
There's survivor's guilt and flashbacks. Terrana recalls when a Humvee was hit by an improvised explosive device.

Terrana says he has been diagnosed with Post Traumatic Stress Disorder (PTSD). This year, he finally went to the Veteran Affairs for help, especially after the tragedy that unfolded within his unit not just overseas, but on U.S. soil.

The thing is this generation has hundreds of thousands stepping up for their sake. When asked why they do not help the older veterans with the highest percentage of suicides, they disregard the need. Is it that they think it is too late to help older veterans? Or is it a matter of older veterans are not on social media and are easily forgotten?

If not for the forgotten generations, nothing would have been ready for this generation. In the 70's the DAV commissioned a study called "The Forgotten Warrior Project" but it is doubtful they thought history would repeat and they would be forgotten all over again.


In 1976, DAV also funded the groundbreaking Forgotten Warrior Project, which first defined the issue of post-traumatic stress disorder (PTSD) among war veterans.Vietnam veterans were experiencing serious postwar problems at the time. DAV hoped the new study would make it impossible for Congress, the VA and the American public to ignore what was going on.When Congress and the VA failed to act on the findings of the project, DAV initiated its own Vietnam Veterans Outreach Program. Fortunately, this DAV sponsored study and DAV’s clinical outreach work spurred other research that forced the government to realize the psychological impact of war on veterans of Vietnam and all wars.


All the public attention is on OEF and OIF veterans.

OEF and OIF veterans have received "training" in "resilience" as PTSD and suicide prevention for over a decade. Yet still they lose their battle.

They have received funding in the billions dedicated to their care from Congress, but still they lose their battle.

They have the Veterans Crisis line to call, and they do,

But far too many still lose their battle.

They have Veterans Courts to help them find the resources they need along with someone standing by their side throughout the process.


The first Veterans Treatment Court was founded by the Honorable Robert Russell in Buffalo, New York in January, 2008, after he noticed an increase in the number of veterans appearing on his Drug Court and Mental Health Court dockets. Judge Russell saw firsthand the transformative power of military camaraderie when veterans on his staff assisted a veteran in one of his treatment courts, but also recognized that more could be done to ensure veterans were connected to benefits and treatment earned through military service.

They have homes built for them and their families to take some of the financial burden off their shoulders, but still too many lose their battle.

If you think this country is doing all we can to help our veterans, try to tell them that next weekend when they are supposed to be honored for their service but a lot of their buddies are no longer here.

Posted by Kathie Costos at 8:45 AM