Combat PTSD Wounded Times is a title I chose very carefully. It means to "fight to heal" because that message seems to be left out of far too many conversations. 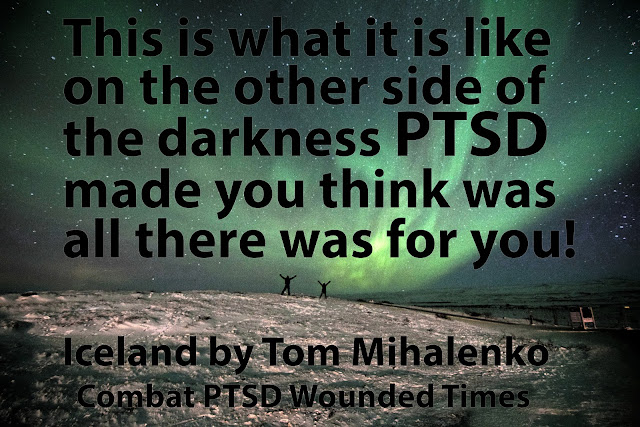 If you use the "all" tab, it is a staggering 21,700,000. Most of the results on the first page are links to hope and help. On the other tab with "news" most are about "22 a day" and this group doing this or that, as if they are more newsworthy than the hopeful links. (Sure would be wonderful if someone could explain that one!)

If we're ever going to change the outcome from suicide to healing, that would be a great place to start! Flip it around to more about healing and less about giving up.

We've already covered all the real news out there the "awareness" raisers didn't bother to learn but this one is the biggest leftover that could put them out of business.

You may think that there is no point in adding one more day to your life. After all, if all you know is the misery you've been living with, there would not be much of a reason to get up again. Yet, if you know that your life can not just be saved, but changed for the better, then you'd have a better option for today.

As you can tell, there are a lot of people out there doing whatever they can to change the lives they want to save. After all, you are worth every effort. Considering you already survived "IT" the worst of your life's movie was already written.

Change your thinking of what PTSD is. It actually means you survived and were wounded. Bet you didn't know that one. Post means "after" and Trauma is Greek for "wound." Now you get the other part of your life's story.

Healing is the middle part when the "stress" is worked on and you manage a more balanced life with your body reacting in a calmer way.

As for the "disorder" you shouldn't be offended by that at all. Lets put it this way. I am not the best housekeeper in the world, (not that I have time anyway) and it gets messy in here. Stuff is all over the place and my desk usually looks like a monster that escaped the shredder. Yet, that disorder is only there until I shut down the computer and get busy putting it into a better order than it was.

Bet they didn't tell you that part either! All the stuff I need is still there but I have to get the junk I don't need out of the way before I can find it all.

Same thing with PTSD. Sure it takes a while and patience, especially if you're doing it alone, but it happens a lot faster and comes out better when someone helps you do the work.

You are actually stronger than you think. As a matter of fact, stronger than PTSD is because what is good within you got you wounded in the first place, and in the second place, has been fighting against PTSD taking "who you are" away. It is also the place within you that it hit like an IED or a claymore.

Still think there is anything weak within you? Then you're not thinking about what you need to know about yourself.

Think of everything you did to get to where you were when "IT" hit. Bet you didn't think of all the training and willingness to sacrifice for other people as coming from an abundance of compassion only equaled to your courage to do it. And that my dear buddy, is exactly what you needed to know at this moment.

You can find it, but as with anything else in life, you'll find only what you are searching for.

Know that this site isn't going anywhere, no matter what. Top that off with a fabulous group who took what I've been saying to a whole new level with a documentary about healing!

Battlefield Home: Breaking The Silence
Every warrior, who ever went to battle, is still there.
Every family that warrior came home to, joined that battle.
They know that the person who left them to defend our freedoms never returned.
The military family knows this. They maintain the silent dignity of the service.
It’s part of the unspoken Code for the families of those who serve.
But for those in the civilian world, that silence goes unnoticed.
BATTLEFIELD: HOME – BREAKING THE SILENCE is an attempt to bridge the gap between those two worlds. It is about the problems they face, the obstacles they endure, and it is also about the hope of the human spirit to return to being whole again.
As the daughter of a combat Marine, the director has the unique perspective to tell that story, and shine a light on the social divide between the families of those who serve and those they protect.
So how about it? Are you ready to work as hard on healing as you did to train for combat? The GAME ON~"IT" lost to you already and this rematch is in your control!!!!!

Start with flipping the results and support the work being done to make it easier for you to fight in this battlefield called home!
Posted by Kathie Costos at 6:12 PM