If you are having a bad time, take a look at his face, then read all he's gone through. You want some inspiration? You want some hope that life can change if our outlook does? Here it is!


Afghan war veteran who lost all his limbs learns to live with new arms
THE FREE LANCE–STAR
By KRISTIN DAVIS
November 12, 2017


He was a quadruple amputee, one of five from the wars in Iraq and Afghanistan, and it wasn’t long before a team of doctors visited Walter Reed to talk to him about an arm transplant—attaching the arms of a dying person onto what remained of his. 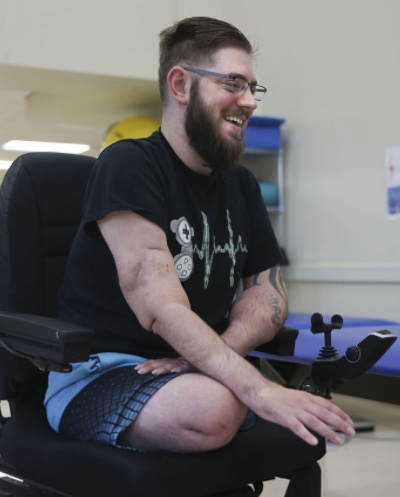 Peter Cihelka The Free Lance Star
After the 16-hour surgery, after the nerve blockers dented pain so torturous he nearly asked the doctors to undo all that he’d pinned his hopes on, John Peck looked down at his hands and wondered about the man they’d come from.

A tiny white scar, narrow as a hair’s breadth, ran like a dash across his right wrist. He turned them over. No calluses on the palms or fingers. The man who’d given him what a bomb blast took away had not played guitar or gardened or labored with his hands.

Peck lay in a hospital bed at Brigham and Women’s Hospital in Boston, 500 miles from his home in Spotsylvania County where the wait for a double-arm transplant had dragged on for more than two years.

In the weeks after he was approved for the surgery in 2014 and placed on a waiting list, Peck’s cellphone had become like a limb itself, never leaving his side. But weeks turned to months and soon a year had passed with no call. As a second year approached, he no longer clung to it in the same way.

Sometimes, he even wheeled himself outside without it.
read more here
Posted by Kathie Costos at 4:44 PM