Friday's police-involved shooting is 9th this year in Jacksonville

Court records show Smith was arrested on Sept. 19 on two counts of aggravated assault on a law enforcement officer and one count of domestic battery. On Oct. 17, he was referred to a pretrial intervention program for military veterans. He was out on bond Friday but was due to be back in court later this month. 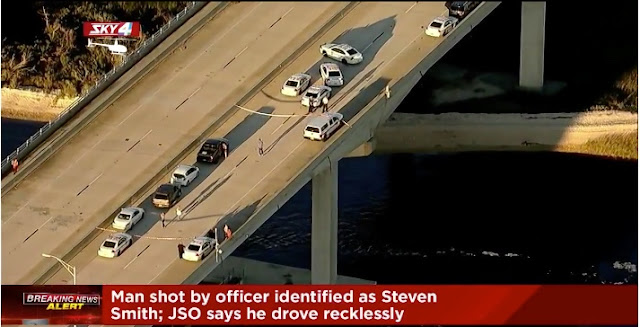 JACKSONVILLE, Fla. - A Jacksonville Sheriff's Office officer shot and injured an armed veteran who has had previous run-ins with law enforcement, after a crash Friday afternoon on the Wonderwood Bridge in the Mayport area, authorities said.
Steven Smith, 32, is expected to survive after he was shot twice by Officer A. Will, Assistant Chief Scott Dingee announced at a Friday evening news briefing.
At 4:41 p.m., two 911 calls came in about hit-and-run incidents on Nesting Eagles Way, where residents said a man was driving recklessly -- hitting mailboxes, poles and trees, Dingee said.
Two minutes later, Dingee said, a third 911 caller reported a mentally ill man who was posing a threat to the caller's relative on nearby Blue Eagle Way East near Girvin Road in East Arlington.
read more here

Posted by Kathie Costos at 5:13 PM