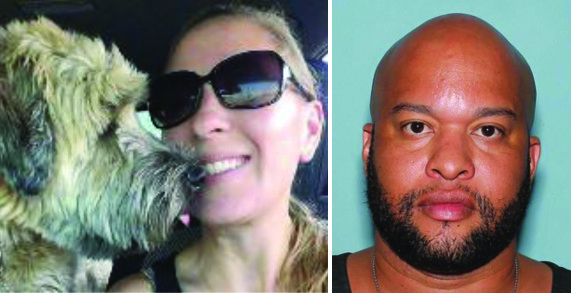 Police are still looking for the remains of Julia Jacobson, 37, of San Diego, and her wheaten terrier, Boogie. Jacobson was reported missing Sept. 2, 2017, and was last seen in Ontario. Her ex-husband, Dalen Larry Ware, 39, of Laveen, Arizona, was arrested Oct. 13, 2017, on suspicion of murder. (Photos courtesy of Ontario Police Department)

The man accused of killing his ex-wife — an Army veteran from San Diego — pleaded not guilty to charges of murder Monday, Nov. 6, in West Valley Superior court in Rancho Cucamonga, according to court records.
Dalen Larry Ware, 39, was first arrested on Oct. 13 in Arizona with help from the Phoenix police and the FBI’s Violent Crime Task Force. He was returned to California late last month to stand trial.
Despite the charges, the body of Julia Jacobson, 37, and her dog, Boogie, have yet to be found, Ontario police officials said. Jacobson’s family reported her missing Sept. 2.
On that morning, Jacobson was seen at a 7-Eleven in San Diego. Later that day, her debit card activity placed her at a gas station in Ontario, according to San Diego and Ontario police.
read more here
Posted by Kathie Costos at 4:15 PM