Shadows on The Wall

I was an Army brat before I became an Army wife. My Dad was a Korean War veteran and my Uncles fought in WWII. Three veterans I saw all the time but hardly paid attention to their stories. That is, what little they talked about what they did.

They'd sit around the kitchen table with cards, food and drinks, swapping the same old funny stories and laughing as if they heard it for the first time.

Sooner or later, one of my Uncles, a little more emotional than the others, would get quiet. Tears would well in his eyes and my Aunt would put her hand on his shoulder. He'd look gently at her tender smile. Then someone would crack another joke.

I read a confession from Pete Candler about how he wished he had the courage to ask his Dad about his service in Vietnam. Guilt set in because I didn't even have the interest to listen to what they did talk about. 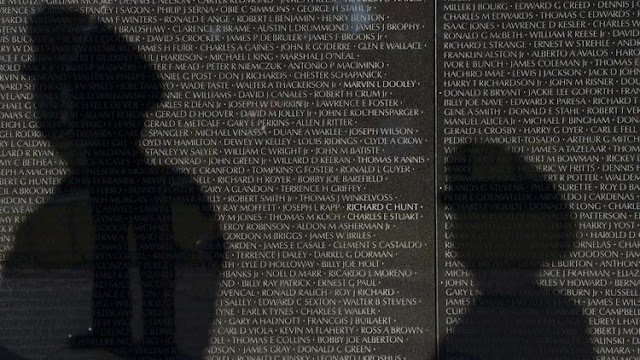 The shadows of members of the U.S. Army appear on the wall of the Vietnam Veterans Memorial on the National Mall in Washington, D.C., Nov. 10, 2014, on the eve of Veterans Day. (Saul Loeb, AFP/Getty Images)

**When I was a boy, Dad's Army service uniform hung in a closet in my brother's room, along with his combat boots and black felt cavalry hat with the captain's bars pinned on the front. I never touched the dress uniform, but I used the hat for dress-up and possibly for one of the "Son of Rambo" home videos my brother and I shot on the VHS handheld. Dad seemed indifferent to the existence of the mementos of his Army service. If he wasn't, he never said anything. But we didn't bother to find out, either, because the subject of Vietnam was a no-fly zone. Dad simply didn't talk about it, and he must have had his reasons.My father volunteered for a controversial war; he served a one-year tour because he chose to. Whenever I meet an Army solider or veteran, I tell them that my dad was a Huey helicopter pilot in the 1st Air Cavalry Division in Vietnam in 1966 and 1967. I watch as their jaws slacken and their eyebrows pinch slightly. They often say the same thing. Pete Candler, Washington Post

It wasn't until I became an Army veteran's wife that I took an interest in the living history I had in my own family.

It happens all the time when a family has a veteran but while that fact is acknowledged on Memorial Day and Veterans Day, the topic is avoided the rest of the year.

It is not until their veteran is in some sort of crisis, they begin to pay attention. Sometimes it is medical, as with Agent Orange or other wounds caused by service. Sometimes, most of the time when these Vietnam veterans enter into retirement, it is PTSD no longer allowing the veterans to stuff the pain into the back of their minds.

One truth stands out and that is the bond they share with the others who also helped create the history we mostly ignore.

**"Vietnam veterans personally re-entered society with honor and vibrancy. Vietnam veterans were given so little when they returned home, but they gave so much back. Vietnam War veterans became business people, nurses, entrepreneurs, civil rights leaders, doctors, inventors, politicians, government officials, teachers, parents and leading members in society. What is so remarkable is that as the country turned away from their military service, they turned toward the country in terms of what more they could provide to make the country better. The lesson for my generation of military veterans is clear, we can and need to do more to create an even better United States." Chad Storlie Herald Net


**"The missing link – veterans from earlier wars. There were no invitations to join the VFW or American Legion and a wall of indifference when I brought up the subject with members I knew. It was a quarter century before I was approached by either of those groups about joining. By then my own shell of indifference rejected those as insincere." Jim Brumm WRAL

**"I don't want to forget these guys," said Baffico, who served in the U.S. Army's 101st Airborne. "I can't explain why they got killed and I got to live, but I did. And I need to do something with that. That really is the essence of why I come here." Baffico wasn't alone. As he says, his wife Max "saved me." Paul Baffico ABC Chicago

**"What kind of group did I join? They're all hugging!" says Lopez, 76, of Naperville. "They said it's a habit. When they were in Vietnam, they would hug because they didn't know if they were going to see each other again. How do you live like that?"

Veterans such as Atkinson, who served in the Navy in Vietnam from 1968 to '69, say it's a matter of necessity.

Atkinson took medication for a time to stabilize his depression, and he wants people to know that's OK. He continues to meet with a counselor he found through the VA. But his most effective way of maintaining his mental health has been through the second brotherhood he's found. Bill Atkinson Daily Herald