A few days before Veterans Day I wrote to the Washington Post. Monday they finally replied saying it would not be published. Since they are not interested in getting the truth out there, this is what I wrote.

Too Many Veterans End Day By Suicide

In a few days, people will show up for veterans. Some will watch a parade in their town. Some will go to a cemetery to put flowers near the name of someone they remember. For others, this day will hit especially hard. It is the day a veteran decided to die.

Some talk about “22 a day” as if no other veteran committed suicide on any given day. Some use “20” as if those numbers are some sort of magical term, but while they may have good intensions, they didn’t bother with investing time to learn the facts.How can anyone expect to change something they do not understand? How can they ask for money to talk about a subject as serious as suicide, when it wasn’t even important enough to read the reports?

The VA Suicide report from 2012 with “22 a day” was an average from death certificates collected from just 21 states. The follow up in 2016 with “20” a day, complied from more data, including the CDC, also used death certificates. The report did include a shocking detail that should have proven efforts have produced the opposite result.

In 1999 there were 20 veterans committing suicide a day. The truth is there were over 5 million more veterans living in this country at the time.With over 400,000 charities claiming to be helping veterans, Veterans Courts, the VA Crisis Line, and “awareness” folks in every state talking about a number, they are not even close to the truth. None of these new groups ever mention that 65% of the veterans committing suicide are over the age of 50, or explain why they will not even discuss them.

The reports did not mention was that states like California and Illinois do not have sections for military service. Bills were passed this year to correct that, however, if the veteran was not in the VA system, service was not on the death certificates, they were not counted.

Then there are the thousands of veterans with PTSD or TBI discharged under “less than honorable” excluding them from benefits, help, and above all, being able to claim they served. Between 2011 and 2015, there were “91,764 service members that were separated for misconduct,” according to the GAO. Most states have the clause that the discharge had to be under “honorable” conditions. No one is counting their suicides.

Veterans face off with law enforcement all over the country and no one is counting them as suicide even if officers responded to a mental health crisis call.

The VA overview of data showed since 2001 veteran suicides have increased 32.2%, and those are just the ones they do know about. The military has seen the number of enlisted personnel decrease, yet over a decade after “prevention” and “resilience training” began, the average remains at over 1 service member per day ending their own life.

Congress insists on writing and funding Bills that repeat proven failures. Researchers repeat studies done over the last 40 years. If everyone is doing everything, when do we get a chance to help these veterans live?

That is the ugly truth of this. The beautiful thing is, with the right help, these veterans can heal, no matter how old they are!

The Disabled American Veterans began that effort in 1976 with the Forgotten Warrior Project. Seems like a good time for the rest of the forgotten to be remembered by the rest of us.

It had to be under 700 words and I got it done in about an hour. Sure, it could have been better, but I wasn't hoping so much they'd publish it, as I was hoping they'd do something about it.

No questions asked, just the rejection email. You'd think someone would want to know where all that information came from. Then again, you'd think they'd put facts ahead of whatever everyone has been saying.

The truth is, while we have so many running around the country claiming to be raising awareness, it has only gotten worse for the veterans.

I am plugging in the links before I post this, so you can discover what the Washington Post didn't want to know.

If you want further proof of what I've been saying since the VA released the reports, here you go with some recent articles on the outcome of all this awareness. And then for an extra knowledge bonus, some recent news reports of folks running around the country wanting you to think they are doing anything more than talking about a problem they get paid to talk about, but didn't manage to read any of the reports or do a fucking thing to change the outcome.

Am I pissed? I don't have to answer that question since you already know. I thought of all the newspapers I could send it to, the Washington Post would at least wonder what I was talking about since they have been investigating all this going back to 2006. They published the Army report stating clearly that redeployments increased the risk of PTSD by 50%.

"The report also found a doubling of suicides among soldiers serving in the Iraq war from 2004 to 2005, the latest period for which data are available. Twenty-two soldiers took their own lives in Iraq and Kuwait in 2005, compared with 11 in 2004 and 25 in 2003, Army officials said." 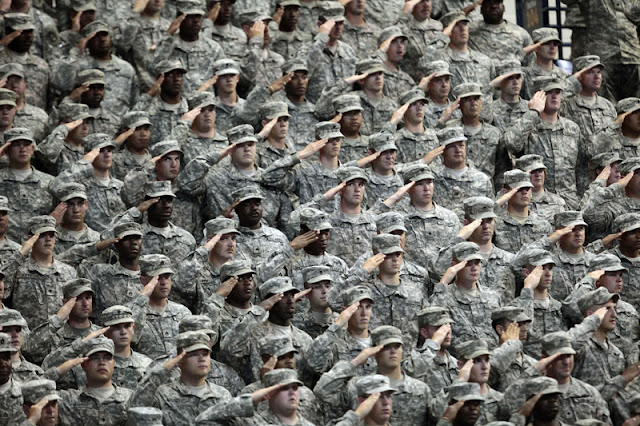 Why is this important to the Army?
Enhanced resilience, achieved by a combination of specific training and improved fitness in the five domains of health, can decrease post-traumatic stress, decrease the incidence of undesirable and destructive behaviors, and lead to a greater likelihood for post-adversity growth and success. It ensures continuity of effort among the disparate organizations which currently provide education and training, intervention, or treatment programs to Soldiers and their Families.

The CSF will ensure Soldiers and Family members have the opportunity to enhance their resilience throughout their careers. The CSF program will maximize available training time, by equipping Soldiers with the skills to become more self-aware, fit, balanced, confident, and competent. Soldiers with these attributes will be better prepared to meet ambiguous and unpredictable challenges and help restore balance to the Army.

At least that is what they claimed back in 2009 after Battlemind failed to deliver on the training to keep them alive.

These are the results they have not been living with.

According to the university, 277 veterans in Arizona committed suicide in 2016, an average of two suicides every three days.In comparison, there were 877 suicides across the state in 2016, the ASU Center for Violence Prevention and Community Safety found.The center determined the death rates based off the number of suicides per 100,000 people. According to the U.S. Census, there were about 505,000 veterans living in Arizona last year.

Veterans in Arizona committed suicide at a rate of 55 per 100,000 last year while non-veterans did so at a rate of 14 per 100,000, according to the report from Arizona State University's Center for Violence Prevention and Community Safety.
That reflects a 391% difference.
Yet a VA report last year said U.S. veterans are 22% more likely to commit suicide than civilians.

As Alyssa Thurlow shows us, their goal is to bring awareness to the high number of suicides in the veteran population.22... that's the number of veterans and active military members who take their own lives every day.


This year, LaJoie started the Silhouette Project to raise awareness about veteran suicide. She displays silhouette cutouts of soldiers who have lost their lives to suicide. It represents the number of veterans who die by suicide each day nationwide...Another organization aimed at helping struggling veterans is the Maine Veterans Project. Shawn Goodwin is the founder, and a veteran himself. Goodwin also sits on Congressman Poliquin's newly created Veterans Advisory Panel.

These are just from the first page of the 379,000 Google results.

Fox11online.com-10 hours ago
The Oshkosh Police Department will begin handing out challenge coins to veterans to hep raise awareness on veteran suicide, November 14, .

Be There: Campaign to raise awareness of veteran suicide

Fox News-Nov 13, 2017
Eleven states and 2,670 miles later, the “Walk of Life” raised awareness about veteran suicide, and it gave the men a chance to heal old

Fox11online.com-Nov 11, 2017
The 5th annual Veteran suicide awareness march will take place in the ... or 2.0 miles to remember the 20 Veteran lives lost a day to suicide.

WTOP-Nov 4, 2017
“I'm doing an awareness campaign for the 22 veterans that die by suicide daily,” Raiklin said. “Each mile represents one of our lost brothers ...

WDRB-Nov 11, 2017
BARDSTOWN, Ky. (WDRB) – On this Veteran's Day, our country's heroes were honored in a different kind of way in Nelson County by raising ...
Posted by Kathie Costos at 5:31 PM