"VietNow pocketed donations and did virtually nothing for veterans"

"Instead, VietNow pocketed donations and did virtually nothing for veterans. Today's settlement finally will put an end to VietNow's egregious fraud." Attorney General Lisa Madigan 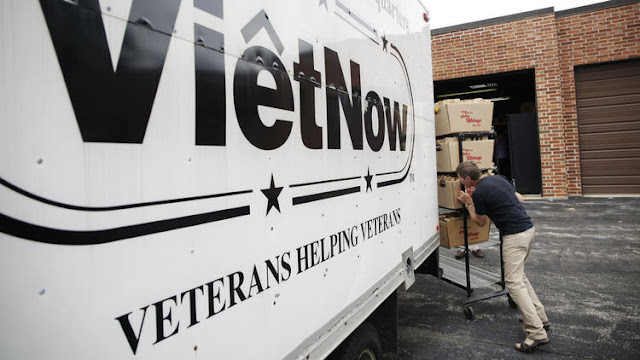 A VietNow charity volunteer pushes a rack of boxes filled with hundreds of sandwiches bound for homeless people in Chicago on July 19, 2015, in Lombard. (Stacey Wescott / Chicago Tribune)

Attorney General Lisa Madigan on Monday announced a settlement led by Illinois and 23 other states to dissolve VietNow National Headquarters Inc., a Rockford charity that claimed to help veterans overcome joblessness and post-traumatic stress disorder.
VietNow, which also goes under the name VeteransNow, will shut down operations, and its remaining assets will be distributed to two legitimate charities, according to Madigan and court records.
Madigan sued the charity after a 2015 Tribune investigation found that VietNow had raised more than $20 million between 2003 and 2014 but spent 80 percent of those donations on for-profit telemarketers. Most of the remainder went for administrative costs, the Tribune reported, leaving just a fraction of the donations for programs to help military veterans. State attorneys general from across the country soon joined Madigan's lawsuit and took other enforcement actions.
read more here

Posted by Kathie Costos at 4:08 PM