"Since its formation in 2014, Villagers for Veterans has raised more than $500,000. The organization has presented 19 all-terrain wheelchairs to paraplegic and quadriplegic veterans who had served in Afghanistan and Iraq. Besides the many fund raising activities, it sponsors educational initiatives such as PTSD seminars and provides respite services for care-giving families." 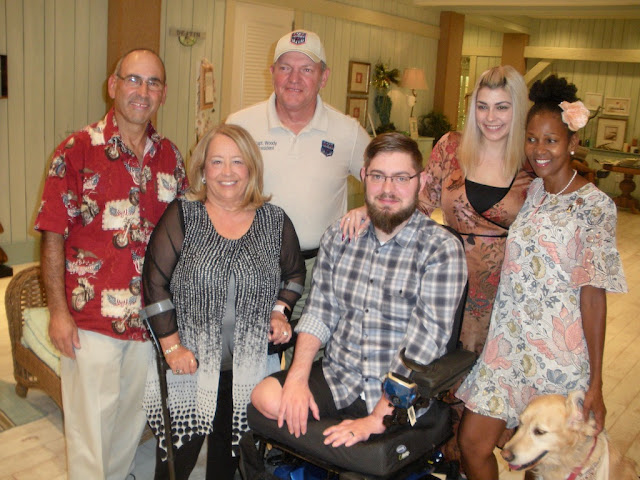 With its goal of $10,000, a Villagers For Veterans fundraiser, Saturday evening, will help a military hero continue his incredible battle to return to a life of self-independence.
John Peck, then a 24-year-old Marine, had lost both arms and legs stemming from an improvised explosive device (IED) in Afghanistan, May 24, 2010.  He then spent two years in Walter Reed National Military Medical Center undergoing 27 surgeries, months of daily medical procedures, and endured countless hours of intensive rehabilitation.

Peck became the third quadruple amputee of the Afghan and Iraq wars, and the first Marine to receive a double-arm transplant.  He also has the distinction of being only one of two people to ever survive blood contamination by the flesh-eating fungus, Aspergillosis.
Some 250 Villagers gathered at the SeaBreeze Recreation Center to honor his wartime service and financially support Peck’s on-going recuperation. The evening was spearheaded by Marie Bogdonoff, Villages for Veterans founder and president.
read more here
Posted by Kathie Costos at 6:55 AM