"I've got 57 medals," Holloway proudly proclaimed, remarking that some were pinned to his chest by President Lyndon B. Johnson himself.

EDITOR'S NOTE: The Times Free Press in November 2016 published a story that included information about Vietnam veteran Stephen D. Holloway, who was speaking at a Veterans Day event in Pikeville, Tenn., and claimed to be the most-decorated veteran of the Vietnam War. Holloway's public claims were challenged by veterans of Vietnam and other conflicts, and the Times Free Press has spent more than a year investigating his military record. To date, Holloway maintains his claims are accurate, though few of his medals and awards have convincing documentation. This is part 1 of a two-day series.
Silver Star. Bronze Star.
Prisoner of war in Vietnam.
Nine Purple Hearts.
Sounds extraordinary, but that's what 69-year-old Vietnam veteran Stephen Douglas Holloway claims.
For three of those claims, the Hixson resident's DD-214 — the official document every military veteran who serves is given when discharged from duty — backs it up.
One of Holloway's multiple DD-214s, anyway.
If Holloway's Purple Heart claims are true, veterans who study military awards, documents and records say, he would be the most decorated service member to serve in the Vietnam War.
But so far, the Times Free Press has been unable to verify any of those claims through military channels, or through Holloway himself.

A fake Purple Heart claim flies in the face of the people who have legitimately received them. 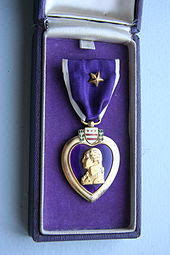 Most decorated American soldier in US Military history

The title of most decorated American soldier probably goes to Robert Lewis Howard, a US Army soldier and Medal of Honor recipient of the Vietnam War. Howard was born July 11, 1939 and he died at age 70 on December 23, 2009. Robert L. Howard was wounded 14 times while serving over 54 months of combat. He was awarded 8 Purple Hearts, 4 Bronze Stars, and was nominated for the Medal of Honor in three separate cases.
Robert L. Howard enlisted in the US Army at Montgomery, Alabama and retired in the rank of Colonel. read more here

Ten time a hero, Curry T. Haynes
Having recovered from malaria, he was “good to go” a second time and reported back to his unit. With one Purple Heart to his credit, if Haynes was wounded two more times he would earn a trip back to CONUS, the Continental United States. The rule was: Three Purple Hearts earned a soldier the much-sought-after ticket home on the Freedom Bird. Most likely the architects of the “three-strikes-and-you’re-out of the war” rule had meant the policy should be applied to three separate engagements. Hayes earned nine more Purple Hearts in one engagement.