46-year-old Iraq and Afghanistan war veteran, John, struggled to reintegrate back into society after leaving the army 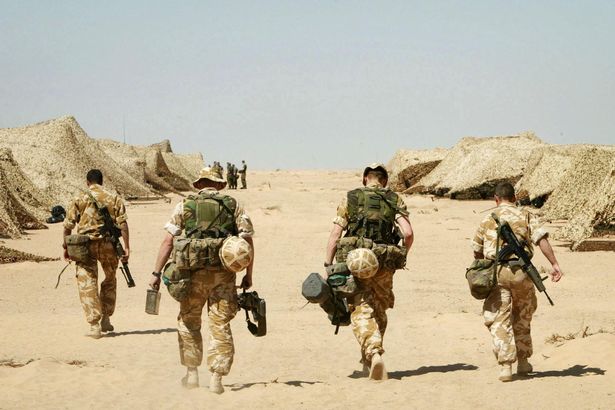 PTSD war veteran 'John' has spoken about his struggle to reintegrate himself into society after leaving the armed forces. Pictured are British soldiers from 29 Commando Regiment Royal Artillery return from a security patrol to their camp in the Kuwait desert near to the Iraq border March 15, 2003

An Iraq war veteran who struggled to adapt to life outside of the army has spoken of how if it wasn't for "life saving" intervention by a Grimsby mental health crisis team, he would take his own life.
Sitting in the crisis assessment room at Navigo's mental health clinic in Grimsby, wearing a Help for Heroes shirt and clasping a mug of black coffee, John (not his real name), bravely opened up to talk about his struggle to reintegrate himself into society after leaving the armed forces.
For the 46-year-old army vet, who served in both Iraq and Afghanistan between 2003 and 2010, wants to use his story of suffering with post-traumatic stress disorder (PTSD) to encourage other men to talk about mental health troubles.
"Nothing makes you any less of a man because you've got mental health issues. Don't feel ashamed", says John, whose life spiraled out of control when he left the army in 2012.
read more here
Posted by Kathie Costos at 4:09 PM