FOX 17 News
Rebecca Russell
December 30, 2017
HELMAND PROVINCE, Afghanistan-- Some West Michigan Marines deployed overseas will be bringing home a little piece of Afghanistan to Michigan. They found two puppies and with the help of loved ones back home, they raised enough money for vet bills and the long trip back home to Michigan. 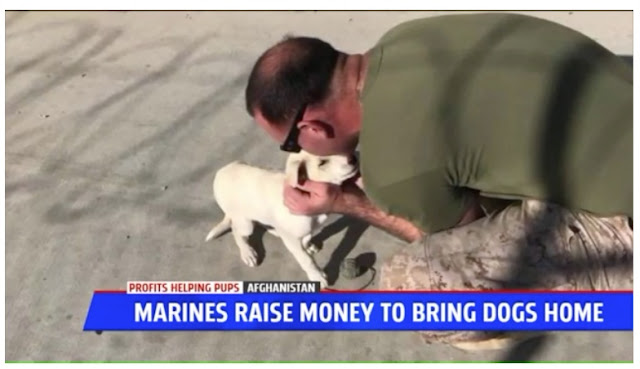 Hayden Gort is currently deployed to Helmand Province, Afghanistan. His team found a puppy going through their garbage a few weeks ago. Another platoon found a different puppy on the side of the road while out on patrol. They've been taking care of them ever since and soon they'll be on a plane back to West Michigan.
It all started three weeks ago.
"Me and my team were taking the trash out in the morning as we do every morning," said Gort. "We saw one of the trash bags moving and was somewhat empty. There was a puppy laying in it trying to dig through the trash to find food."
That's when they found the puppy they would name Sabula.
read more here
Posted by Kathie Costos at 11:01 AM