He almost died in Iraq. Now, an Aurora cop and ex-Marine owes the VA $16K due to a clerical error.
Chicago Tribune
Denise Crosby
January 14, 2018


Michael Bond knew he'd have a tough time convincing his Marine buddy to accept any form of charity.
So the former Naperville man chose not to tell Aurora Police Officer Joshua Horton about the GoFundMe account he'd set up for him. 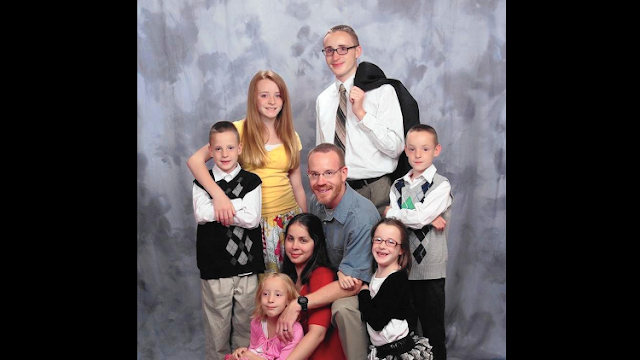 Joshua Horton, who was seriously wounded in 2004 in Iraq right before becoming the father of quintuplets, poses for a family photo with the four surviving quints, now 14, his two older children and second wife Aria. (Joshua Horton)

The "Wounded Marine Family Relief" fundraiser was created to help offset a clerical error that was taking away almost $16,000 in disability payments Horton received from the Veterans Administration after being seriously wounded in Iraq. Those VA benefits had been going to Horton's six children — including four surviving quintuplets who had been born in October 2004 at Edward Hospital, even as their father was being flown out of Iraq with life-threatening injuries sustained in a mortar attack.
Bond, who like Horton, had re-enlisted for active duty after 9/11, describes his close friend — they met while serving with Fox Company, 2nd Battalion, 24th Marines — as a "warrior servant" who has "answered the call every time, without hesitation, even when he could have stood down."
Horton could certainly have claimed a hardship leave after finding out his wife Taunacy was pregnant with quintuplets. And still, the Marine sergeant from Oswego remained in Iraq with his platoon, a decision that nearly cost him his life in the small town of Yusufiyah, just southwest of Fallujah.

Horton certainly has paid a high price for his service to country and community. Despite his many wounds that included traumatic brain injury, the Aurora cop made it his goal to return to the police force he loves. A fall he took two years ago, however, while responding to a domestic dispute, injured his back and forced him onto light duty.
read more here

Posted by Kathie Costos at 4:58 PM